FYI: Text of Lawsuit Challenging UC's Use of SAT & ACT 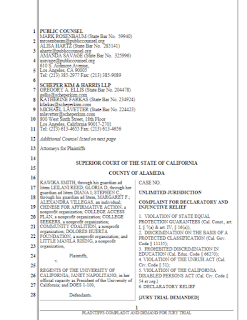 There is a lawsuit pending against UC for its use of SAT and ACT scores as part of the admissions process. As prior posts have noted, an ultimate decision on this matter is also pending. A faculty committee has recommended retention of the tests while alternative approaches are being studied.

"The fact that socioeconomic characteristics account for almost 40 percent of the variation in applicants’ SAT and ACT scores—as compared to just nine percent of the variation in applicants’ high school grades—means that the UC is knowingly using a metric that weighs in favor of more affluent students relative to students with less accumulated advantage." (p. 27)

As might be expected, the issue is complicated and goes beyond the influence of socioeconomic conditions on the tests - which most people would assume, even without statistical evidence, is likely to be present. For example, suppose hypothetically that grade inflation has affected high school grades so that, in the limiting case, everyone gets an A. In that case, socioeconomic conditions would have no impact on the GPA, although they would continue to influence the test scores. In addition, the GPA would have no relation to eventual performance of the student in college because it doesn't vary. The question then would be whether the test scores carry information about performance of students in college.

In any case, the brief challenging UC's use of the tests is now at:
https://issuu.com/danieljbmitchell/docs/2019.12.10-kawika-smith-et-al-v.-uc-regents-et-al
Posted by California Policy Issues at 7:56 AM