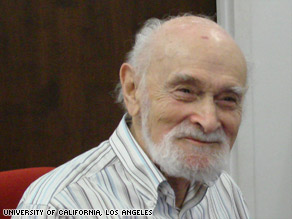 We have received word that Professor-Emeritus Melvin (Mef) Seeman of Sociology has died at age 101 (almost 102). No obituary has yet appeared.

In 2014, the UCLA Emeriti Association bestowed a Lifetime Achievement Award on Prof. Seeman. From an announcement of that award:

Melvin “Mef” Seeman, Professor Emeritus of Sociology, has been chosen by the UCLA Emeriti Association as the recipient of its Lifetime Distinguished Service Award.   Over his long and distinguished career Mef has been best known for his foundational contributions to the empirical study of alienation.  He served as Department Chair and President of the Pacific Sociological Association, and in 1991 was awarded the American Sociological Association’s prestigious Cooley-Mead Award for contributions to social psychology.  He formally retired in 1988, among the last professorial cohort obliged to retire because of “age.”  From 1988 until very recently Mef served UCLA as special advisor to the Academic Vice Chancellor, helping out successive incumbents, as well as myriad Committee on Academic Personnel chairs and department chairs,  with especially delicate and difficult academic personnel matters.  This quarter century “post-retirement” second career is as remarkable as it is unusual, if not unique.