The LAO on the governor's budget Following past practice, the Legislative Analyst's Office (LAO) - the neutral arm of the legislature which evaluates public policies - has issued its report on the governor's January 10th proposal for the 2018-19 state budget.

Although the LAO is nonpartisan, it does represent the legislative interest in budgetary and other concerns, so it always tilts toward advising the legislature to set its own priorities, even if the governor's proposals seem reasonable. That approach is pretty much what you find in the LAO's commentary on the budget proposal.

It does hint that revenues may in fact be seen to be higher than projected by the governor by the time the May revise proposal for the budget is made. And, while characterizing the governor's goal of building up the rainy day fund as reasonable, LAO suggests the legislature should set its own target for building up the reserves. Since the legislature is unlikely to lean towards more prudence than the governor (more reserves than he proposes), you can read between the lines to read the LAO as saying that maybe the reserve target could be lower (and thus spending higher). 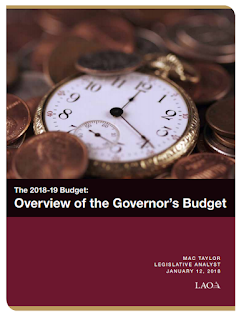 LAO does not have much to say about higher ed spending:

$92 Million Each for CSU and UC. The Governor proposes augmenting General Fund spending for CSU and UC by $92 million each, which represents an increase of about 3 percent at each university system. This increase is somewhat lower than the 4 percent to 5 percent base increases the state has provided in recent years. Coupled with the proposal, the Governor indicates he does not want either CSU or UC to increase tuition charges for resident students in 2018-19. Both the CSU Trustees and UC Regents are in the midst of considering such increases. In addition, the Governor’s budget does not establish new enrollment targets for CSU or UC or designate any new funding for enrollment growth.

The fact that LAO highlights the modest increase proposed compared to the past and notes there is no funding for increased enrollment can be read as a hint that perhaps additional funding might be allocated.