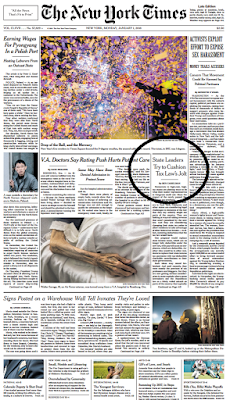 An earlier post on this blog provided some information (not advice!) about personal tax avoidance through pre-paying property taxes in the context of the new tax law.* The New York Times today carries an article about high-tax states such as California seeking to circumvent the $10,000 cap on deductions for the sum of property and income taxes paid to state and local governments that was part of the recent federal tax legislation. Among the ideas is the proposal that charitable contributions to the state could be deductible dollar for dollar from the state income tax. Charitable contributions are not subject to the $10,000 cap. UCLA law professor Kirk Stark is mentioned in that context:

...Some proposals are more complex. Kirk Stark, a law professor at the University of California, Los Angeles, has suggested that states encourage residents to donate money to their state governments, then let the governments credit those donations against their state income taxes. Such donations would qualify as charitable donations, which are still fully deductible on federal taxes.

Mr. Stark noted that such programs already existed, albeit in a much more limited form. Several states let residents count donations to private schools as state tax payments under certain circumstances, an initiative that conservatives have promoted as a step toward school vouchers...

Kevin de León, a Democrat who is president pro tem of the California Senate, has announced plans to introduce legislation aimed at reducing the impact of the tax law. He is consulting with Mr. Stark, among others, to develop the legislation.

Mr. de León and other legislators concede that they are trying to game the system. But they argue that Congress left them little choice.

“This is highly unusual tax policymaking,” said Mr. de León, who has announced plans to run for the United States Senate next year. “However, this is a highly unusual time in the history of this country.”... 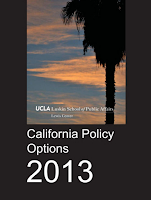 In fact, Prof. Stark co-authored a chapter about this option some time ago - and long before the current tax law came along - in the context of avoiding the alternative minimum tax and benefiting California. You can find his review of the issue in the 2013 edition of California Policy Options, an annual volume edited by yours truly. Go to:
https://issuu.com/uclapubaffairs/docs/2013_ca_policy_options
and flip to chapter 2 on page 49.
====
*http://uclafacultyassociation.blogspot.com/2017/12/fyi-prepaying-property-tax.html
Posted by California Policy Issues at 8:17 AM