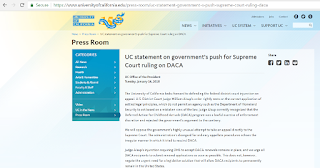 The University of California looks forward to defending the federal district court injunction on appeal. U.S. District Court Judge William Alsup’s order rightly rests on the correct application of settled legal principles, which do not permit an agency such as the Department of Homeland Security to act based on a mistaken view of the law. Judge Alsup correctly recognized that the Deferred Action for Childhood Arrivals (DACA) program was a lawful exercise of enforcement discretion and rejected the government’s argument to the contrary.

We will oppose the government’s highly unusual attempt to take an appeal directly to the Supreme Court. The administration’s disregard for ordinary appellate procedures echoes the irregular manner in which it tried to rescind DACA.

Judge Alsup’s injunction requiring DHS to accept DACA renewals remains in place, and we urge all DACA recipients to submit renewal applications as soon as possible. This does not, however, negate the urgent need for a legislative solution that will allow DACA recipients to permanently remain in the United States.

University of California President Janet Napolitano and California Attorney General Xavier Becerra on Wednesday urged young immigrant students to renew their applications for an Obama-era program that protects them from deportation amid reports that immigration officials in Northern California could conduct a sweep of undocumented people in the coming weeks...

Full story at https://www.nbcbayarea.com/news/local/UC-President-Urges-Students-Renew-DACA-Applications-469725593.html
Posted by California Policy Issues at 8:52 AM