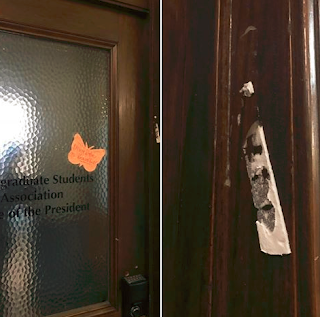 The president of UCLA’s undergraduate student government rededicated a new mezuzah outside of her office Thursday after her previous mezuzah was vandalized over winter break.

Rabbi Dovid Gurevich led the rededication with a speech about the cultural significance of the mezuzah in the Jewish faith and closed the event with the installment of the new mezuzah. The previous one was torn off Undergraduate Students Association Council President Arielle Yael Mokhtarzadeh’s doorframe between Jan. 2 and Jan. 8.

A mezuzah outside former USAC President Danny Siegel’s doorpost was damaged in 2017 as well, Mokhtarzadeh said.

A mezuzah is a small ornament that is placed on the doorframe of Jewish homes and synagogues. It contains two passages from the Torah that symbolize protection for practitioners of the faith, Gurevich said.

UCPD Lt. Kevin Kilgore said the department is investigating the incident as a potential hate crime because the mezuzah is religiously significant to the Jewish faith, and Mokhtarzadeh identifies as Jewish. He added there are currently no suspects or leads in the investigation...

Mokhtarzadeh said she plans to take measures to prevent these types of incidents from occurring again by working with Associated Students UCLA to install security cameras on the third floor of Kerckhoff Hall.