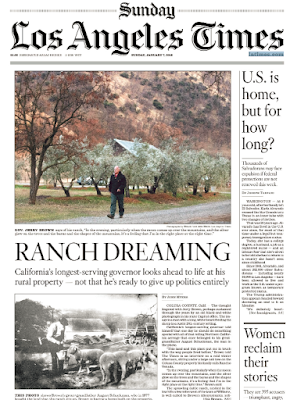 You may have seen yesterday's story in the LA Times about Jerry Brown's plans for retirement, now that he will be termed out in his fourth term as governor. According to the Times, he will retire to a rural life on his ranch - maybe.

Actually, however, he has some things to do before next January. One of them is to present his state budget proposal for fiscal year 2018-19 this coming Wednesday (even though his successor will arrive half way through that year and budget). We noted in an earlier post that elements of budget proposals are often leaked out ahead of the official presentation. This time there have been no leaks. That absence could mean that nothing dramatic is going to be proposed. Or it could mean that secrecy has been maintained. We will have to wait until Wednesday morning to find out, unless something leaks between now and then.

Of course, we are also awaiting the special committee meeting of the UC Regents later today.
Posted by California Policy Issues at 7:07 AM