The Regents and Tuition (or Not) 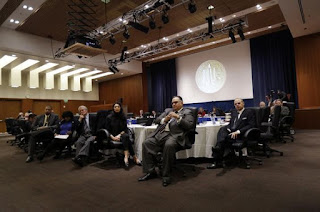 As we noted in our postings on the governor's proposed budget, he has assumed no tuition increase at UC for next year. But the Regents are reported to be planning to raise tuition (or to be considering a raise) at their upcoming meeting, Jan. 24-25. Some Regents are now reported to be requesting a delay. The agenda for the Regents as of this morning does not include an explicit overall tuition item, but here is the LA Times on the issue:

Controversy is brewing over whether University of California regents should vote next week on another possible tuition increase — or delay a decision to allow more people to weigh in.

UC officials have floated the idea of another increase of 2.5%, which would amount to about $290 more in tuition for the coming 2018-19 academic year.

The regents approved a similar increase last year — the first since 2010-11 —  which brought tuition for California resident undergraduates to $11,502.

State Assembly Speaker Anthony Rendon, an ex-officio regent, asked UC President Janet Napolitano over the weekend to delay a vote because he and some of the other regents won’t be able to attend the budget discussion scheduled for Jan. 25 at UC San Francisco. That’s because Gov. Jerry Brown’s State of the State address is scheduled for the same day.

“To start, it lets the Legislature off the hook of addressing the state’s underfunding of public higher ed,” Rhys Williams, Newsom’s spokesman, said in a text Tuesday.

[Note: Newsom is running for governor.]

Students also have asked Napolitano to delay any vote until the March meeting, to be held at UCLA. Student Regent Paul Monge said he and two other student leaders met with Napolitano on Friday and asked for a delay, saying more students would be able to voice their views at a meeting at UCLA than at UCSF, which has no undergraduate campus.

“We’re wanting to provide access to the meeting and make sure there’s robust input from students,” Monge said Tuesday.

Monge said UC officials told students that they wanted a decision on tuition in January to give families time to prepare for any increase. But students countered, he said, that admission decisions for freshmen and transfer students usually are not released until the spring anyway. Freshmen have until May 1 to commit to enroll and transfer students, until June 1.

Delaying a vote, Monge argued, also would give the UC community more time to lobby the Legislature and governor for more money. That, in turn, could eliminate the need for another tuition increase, he said.

Brown made it clear in the 2018-19 budget proposal he unveiled last week that he did not support another tuition increase at UC or Cal State.

“The Administration remains concerned about the impact of tuition increases on lower income students and families and believes more must be done to reduce the universities’ cost structure,” his budget proposal said. “Further reforms should be implemented before the segments consider charging students more.”

At the same time, Brown proposed a 3% increase in base funding for 2018-19, down from a 4% increase in each of the last few years. Leaders of UC and Cal State have expressed concern over the smaller funding increases.

Napolitano and UC Board of Regents Chairman George Kieffer could not be reached for comment on Tuesday.

Items on the Regents' agenda include a "Master of Management" degree at Merced to be run by the School of Engineering (with a tuition premium):
http://regents.universityofcalifornia.edu/regmeet/jan18/a2.pdf
and a look at the total cost of attendance for students - as opposed to just the tuition element:
http://regents.universityofcalifornia.edu/regmeet/jan18/a6.pdf

There is a report scheduled on the bid to continue UC's managerial role in Los Alamos, a legacy of the Manhattan Project. UC has been reported in the news media to be bidding in partnership with Texas A&M, but nothing about the details of the bid appears in the agenda item: http://regents.universityofcalifornia.edu/regmeet/jan18/n3.pdf

Budget approval for additional student housing at UCLA is also on the agenda:
http://regents.universityofcalifornia.edu/regmeet/jan18/fin.pdf

The overall agenda (as of this morning) is at:
http://regents.universityofcalifornia.edu/meetings/agendas/jan18.html
Posted by California Policy Issues at 7:28 AM