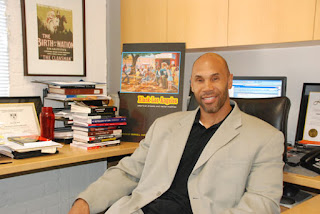 [Yours truly may have missed this announcement. Better late than never.]


Dear Colleagues:
I am pleased to announce the appointment of Darnell M. Hunt as Dean of the Division of Social Sciences, effective July 1, 2017.
A member of the UCLA faculty since 2001, Dr. Hunt is professor of sociology and African American Studies, and has served as director of the Ralph J. Bunche Center for African American Studies since 2001 and as chair of the Department of Sociology since 2015. Prior to his appointment at UCLA, he was chair of the sociology faculty at the University of Southern California.
Professor Hunt’s research interests include race, media and cultural studies, and he currently manages a number of research projects on the experiences of African Americans. He has written and edited several publications, including Screening the Los Angeles 'Riots': Race, Seeing, and Resistance and Black Los Angeles: American Dreams and Racial Realities. In February 2017, Professor Hunt, along with Ana-Christina Ramon, Michael Tran, Amberia Sargent and Vanessa Diaz, released the fourth annual Hollywood Diversity Report, a major project focusing on diversity in the entertainment industry...
Sincerely,
Scott L. Waugh
Executive Vice Chancellor and Provost
Full announcement at http://evc.ucla.edu/announcements/appointment-of-darnell-m.-hunt-as-dean-of-the-division-of-social-sciences
Posted by California Policy Issues at 7:32 AM