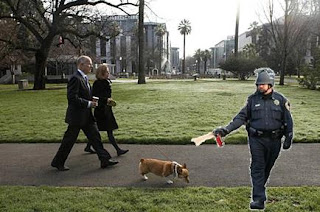 ..."I am seriously concerned that the rules governing the use of force, in particular the use of pepper spray, are not well understood in the context of civil disobedience and various forms of public protest," Brown wrote to Paul Cappitelli, director of the state Commission on Peace Officer Standards and Training. "The recent 'occupation' protests in cities throughout California and on campuses of the University of California underscore the urgency of articulating guidelines that are crystal clear and comport with constitutional requirements."

Brown, who returned to California over the weekend after a vacation out of state, had been silent about the pepper spraying of protesters by police at UC Davis and a clash between protesters and police at UC Berkeley…