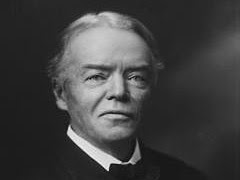 As the excerpt below notes, yesterday was Josiah Royce’s 156th birthday – the Royce after whom Royce Hall is named.

November 10 is the 156th anniversary of the birth of Josiah Royce, world famous philosopher and Grass Valley native. He was the “leading American proponent of absolute idealism, the metaphysical view that all aspects of reality, including those we experience as disconnected or contradictory, are ultimately unified in the thought of a single all-encompassing consciousness,” according to the Stanford Encyclopedia of Philosophy. Royce’s parents crossed the Sierras in a covered wagon in 1849. His father established a general store. His mother continued her career as a teacher by conducting a private school at home. After getting a PhD from the newly opened John Hopkins university, Royce taught English literature and logic at the University of California at Berkeley, Gov. Jerry Brown’s alma mater. The Democratic governor referenced Royce in his January inaugural speech…

The article fails to note that Royce wrote an extensive early history of California.

You can keep a continuous eye on Royce Hall via the webcam at http://www.admissions.ucla.edu/bruincam/default.htm