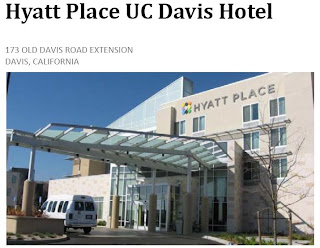 Yours truly has obtained some documents related to the proposed expansion of a campus hotel at UC-Davis. The documents are more complete than what we currently have for the revised UCLA proposal and include a consultant’s market competition study. You can access these documents by scrolling down in this blog entry.

The consultant hired by UC-Davis, as might be expected, indicated that Davis-area commercial hotels would not be adversely affected by competition from the campus project. However, the City of Davis seems to disagree and worries about the loss of room tax revenue diverted from the commercial hotels and about general harm to City development plans. Hotel owners in the Davis area – operating under the name “Save Our Hotels” – have filed a detailed protest with the campus administration.

The UC-Davis hotel - shown above - operates as a Hyatt. It is much more modest than the proposed UCLA project. Currently, it has 75 rooms which rent for roughly $85/day (about half the proposed UCLA price). The proposed expansion would increase the number of rooms to 127 (about half of what UCLA proposes). Interestingly, however, the Davis proposal is for 127 parking spaces for 127 rooms (about the same number UCLA proposes for double the number of rooms).

At the scoping meeting on the UCLA project held last Monday, the UCLA architect described the various architectural and traffic plans for the UCLA hotel/conference center as “conceptual,” i.e., incomplete and uncertain. Yours truly suspects that the reason there is no business plan for the UCLA project currently available is that whatever plan there may be at this point is also at a “conceptual” stage.

Local hotel owners on Monday did voice concern and indicated that they foresaw a loss of business. And there were concerns about the original UCLA plan from our local city council representative. The UC-Davis experience suggests that once more information (a business plan) becomes available, we may see developments similar to what has occurred at UC-Davis.

Below are various documents from UC-Davis:

City of Davis Concerns I