Another Pepper Apology? Let's Focus Instead on the UC Budget 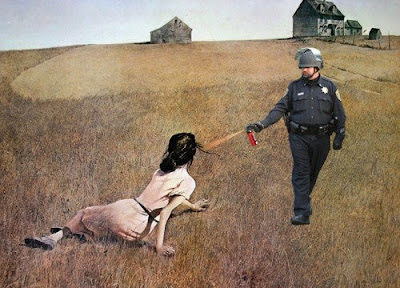 The UC-Davis chancellor has now apologized for the pepper spray incident last Friday. Meanwhile, the Washington Post reports that the incident has gone viral with creative images such as the one above on the web. See http://www.washingtonpost.com/blogs/arts-post/post/pepper-spray-cop-works-his-way-through-art-history/2011/11/21/gIQA4XBmhN_blog.html
Below is video of the chancellor's apology. A story about it is at:
http://www.sfgate.com/cgi-bin/article.cgi?f=/c/a/2011/11/22/MNK71M2548.DTL
As noted in last night's blog post, instead of trying to regain "control" via crisis management techniques, it would be nice if the Regents and the powers-that-be at UC focused instead on the ongoing UC budget emergency. Please see last night's blog posting for a link to the UCLA Faculty Association's position - as expressed to the Regents - back in 2009 on the budget emergency:
http://uclafacultyassociation.blogspot.com/2011/11/pepper-spray-regent-chair-reacts.html
For example, UC needs the legislature and governor to step up and take some responsibility for funding the UC pension system. No immediate state cash is needed; an IOU from the state - as was done back in the days when the state did take its responsibility seriously - would be helpful to UC. Under the current arrangement - in which the state has decided it never heard of the UC pension system - from every dollar that the state gives to UC for its core academic operations, there must be a subtraction to fund the pension. That situation does not exist at CSU (which is under CalPERS). Whether anyone intends it or not, the result of current state policy (or non-policy) will be a slow-moving and unspoken privatization of UC. The Regents can't collect taxes. They control only tuition as a revenue source. Every dollar that should go into the pension plan on behalf of the state, but does not, costs the plan $2 in contributions from non-state sources.
Want to know more? Try
http://www.dailybruin.com/index.php/article/2011/04/on_the_record
As has been pointed out ad nauseum, the lack of state funding for the UC pension is not an old folks or retiree issue. It is a young folks issue, since it taxes the limited budget appropriation the state does provide for core academic programs.
Update: Latest tweet:
mark_yudof Mark G. Yudof
Please note: **There is no tuition item on Monday's regents meeting agenda, nor was there ever a tuition item scheduled.**
There may not be a tuition item but there are budget items:
http://www.universityofcalifornia.edu/regents/regmeet/nov11/fins.pdf
Update: Legislature schedules hearing on UC's use of police

The Legislature will hold a hearing next month to investigate the recent use of police force in response to protests on University of California campuses. The joint hearing of the Assembly Higher Education Committee and Senate Education Committee will be held Wednesday, December 14, Assembly Speaker John A. Pérez announced today…

Dan: while I appreciate your laser-like focus on the budget, I think it is worth keeping in focus the use of chemical weapons on our students. This type of policing seems to go hand-in-hand with the growing defunding of the public sector, not just at the UC but nationally.

I would like to see the Faculty Association at UCLA take a stand against UCPD actions at Davis and UCB, as other Faculty Associations have. True, it is partially symbolic because these things did not happen on our campus. But this kind of symbolic action matters and is well worth taking.

With all due respect, let's not forget the Germans in the 1930's were more concerned about the German economy than the growing influence of the Nazis. We need to draw a line in the sand about what we will and will not tolerate in the protection of free speech. If not, we run the risk of losing, inch by inch, the one stellar U.S. advantage over other countries. Today it is pepper spray. Tomorrow, Kent State again?