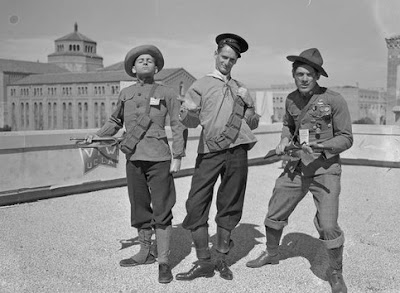 Members of UCLA's "post" of the "Veterans of Future Wars," dressed in World War I-era military uniforms, mug for the camera in the mid-1930s. The "Veterans of Future Wars" was a satirical organization begun by students at Princeton University. The group formed after World War I veterans, many of whom had become unemployed since the beginning of the Great Depression, unsuccessfully lobbied Congress to pay them the full value of their military bonuses immediately, the sum total of which was $3.6 billion dollars, originally to be paid out in 1945. The "Bonus Army" descended on Washington, DC in 1932. Eventually, then-President Herbert Hoover called out the Army to remove the veterans, an act that sealed his defeat in the 1932 election.

The Veterans of Future Wars claimed that they were likely to fight and perhaps die in the wars the United States would fight over the next 30 years, and as such should be paid their military bonuses while they were still alive to spend them. The organization became quite popular on college campuses in 1936, attracting conservative students who opposed the fiscal policies of FDR's administration, and leftist and pacifist students who saw the organization as a statement against war itself. By June of 1936, the group boasted 50,000 students on 584 campuses. The organization disbanded in April of 1937. Ironically, many of the students who belonged to the Veterans of Future Wars would serve in World War II, including all but one of its founding members at Princeton.

Newsreel footage of the 1932 Bonus Army


Mistreatment of World War I veterans - who had fought for their country but were now unemployed - was a major theme of the Great Depression. Note the lyrics of the classic Depression song, "Brother Can you Spare a Dime?":

...Once in khaki suits, gee we looked swell,
Full of that yankee doodly dum.
Half a million boots went sloggin' through hell,
And I was the kid with the drum.
Say, don't you remember, they called me Al.
It was Al all the time.
Why don't you remember? I'm your pal.
Say buddy, can you spare a dime?