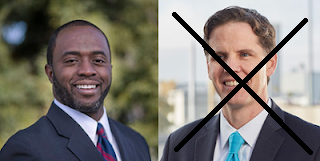 In the election contest for state superintendent of schools, the post-election counting has flipped the race from Marshall Tuck, who appeared to be ahead the day after election, to Tony Thurmond. Tuck was identified with charter schools. Thurmond was more the K-12 establishment candidate. In practice, the superintendent mainly focuses on K-12. But the winner will sit as an ex officio regent in future regents meetings.


Assemblyman Tony Thurmond has won the race for California state superintendent of public instruction, defeating Marshall Tuck in the nonpartisan contest. Two million ballots have yet to be counted but in a tweet he issued this morning, Thurmond said Tuck had conceded the race in a “gracious call to congratulate me and wish me well.” The most recent results showed Thurmond 152,000 votes ahead and leading Tuck 50.8 percent to 49.2 percent with 9 million votes tabulated...
Full story at https://edsource.org/2018/thurmond-wins-race-for-superintendent-of-public-instruction/605167
Posted by California Policy Issues at 4:56 AM