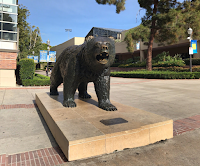 What began as an ostensible trademark dispute over the UCLA Bruin logo, as noted in an earlier post, is becoming a bigger thing.* It's likely to come up at the Regents meeting next week, at least in public comments, as it did at the last Regents meeting in September.

The national chapter of Students for Justice in Palestine has apparently refused to follow a cease-and-desist letter from the University of California, Los Angeles—the site of the annual National SJP (NSJP) conference this month—a day past the deadline. The letter, dated Oct. 31, states that NSJP’s logo for the conference, which will be from Nov. 16-18, consists of “the unauthorized use” of UCLA’s Bruin Bear playing with a Palestinian kite, “which some may interpret as an intention to endorse violence against Israel.”

NSJP’s description of the logo is: “The bear native to California as inspiration for grassroots organizing in the west coast, the kite to signify the power and hope in the Gaza March of Return, the Kuffiyeh, and the birds of freedom leading our way with radical hope towards liberation for all and a Free Palestine.”

Michael Beck, the school’s administrative vice chancellor, wrote in the letter: “Taken as a whole, these uses claim, suggest, or imply an affiliation with or an endorsement by UCLA of NSJP and/or its annual conference, which is simply incorrect.” He demanded NSJP redo the logo using UCLA’s name to demonstrate that the university is just the venue of the conference, and not an affiliate or endorser...

Oddly, as of 7 AM today, yours truly could find nothing about this controversy on the Daily Bruin website.
===
*http://uclafacultyassociation.blogspot.com/2018/11/cant-bear-it.html (Includes disputed logo.)
Posted by California Policy Issues at 7:08 AM