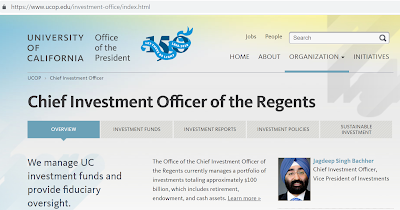 Presumably, it will eventually show up at the upcoming Regents meeting.

The University of California’s assets under management returned 8.1% in fiscal 2018, bringing its total value to $118.7 billion.

The institution’s main drivers for the fiscal year, which ended June 30, were its $12.3 billion endowment and $66.8 billion pension fund, which returned 8.9% and 7.8%, respectively.

The endowment beat its 8.5% benchmark in the period ended June 30, and has consistently outperformed, returning 6.5%, 8.8%, 5.6%, and 5.9% over the past three-, five-, 10-, and 20-year periods, respectively. However, it returned a little more than half of last year’s 15.1%, although the shortfall can be attributed to the stock market’s selloff in first quarter, which has been echoed in October.

Its pension plan, while missing this year’s 8.4% benchmark by 0.6 percentage point, has still outperformed its benchmarks for the five-, 10-, and 20-year spans (it missed the three-year by just 0.1 point). It is also 90% funded.

“Whether it’s a fund we’re investing in or a partner co-investment or even direct investing, we’re now finding more ways to earn returns while being ever-cognizant of the risks we’re taking,” said Jagdeep Bachher, the organization’s chief investment officer, who added that it conducted more private market transactions in the past year than ever.

All assets are encompassed into five separate divisions, including the endowment and pension pools—retirement savings, working capital (total-return investments and short-term investments), and captive insurance. The bulk is invested in public equity (51%), followed by fixed income (29%). Another 14% is invested in absolute return strategies, which is made up of private equity, real estate, and real assets. The remaining 6% is in cash.

A whopping 73.1% of the university’s assets are invested in the US.

The report did not mention whether the University of California surpassed its total benchmark, or what the aggregate benchmark currently is.

Bachher was unable to be reached for direct comment.

Source: https://www.ai-cio.com/news/university-californias-pensions-endowments-drive-asset-outperformance/
Posted by California Policy Issues at 8:27 AM