Back to the Future With CPEC?

Jerry Brown removed all funding for the California Postsecondary Education Commission in 2011. Partly it was a budgetary move in the budget crisis of that era. Partly, Jerry was fine with his own views about higher ed:  [Scroll down below memo for more text.] 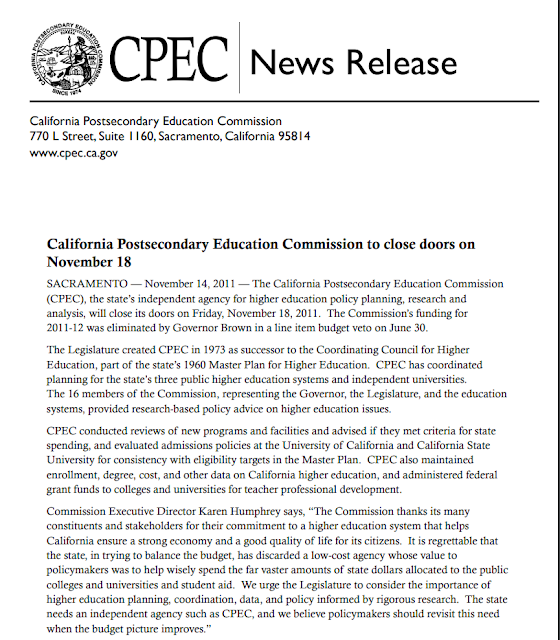 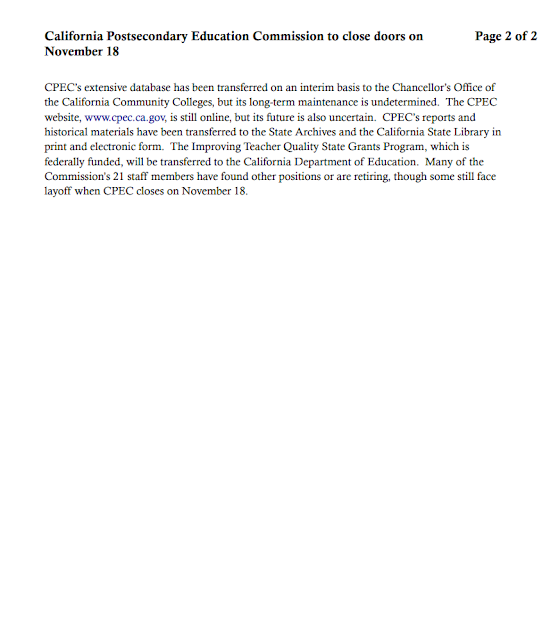 Now it appears that Governor-Elect Newsom may want to recreate CPEC in some fashion. From Inside Higher Ed:

...In his campaign (for California governor, Gavin) Newsom stressed the link between what happens early in a child's life and the progression through school to higher education. He has pledged as governor to create a program where every new kindergarten student in the state is given a savings account by the state to start the path of saving for college. Newsom has also spoken out about the need to address equity gaps early on to assure that students from all groups excel in higher education. He has called it "unacceptable" that of the 10,244 California high school students who took the Advanced Placement exam in computer science in 2016, only 27 percent were female, 15 percent were Latino and 1 percent were black.

The university and community college systems in the state, he said during the campaign, "operate in their own silos." To change that, he has vowed to re-create a coordinating board for higher education (a previous board was killed in 2011) "to set bold statewide goals and hold institutions accountable to them."...

Full story at https://www.insidehighered.com/news/2018/11/07/governors-races-and-higher-education
Posted by California Policy Issues at 8:46 AM