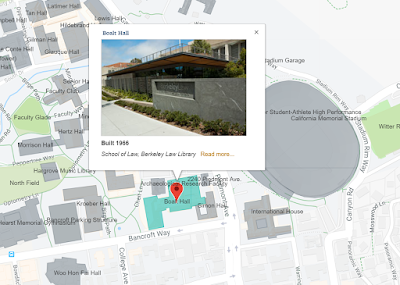 For more than a century, UC Berkeley's elite law school has been closely tied to the name of the building that houses it, Boalt Hall.

Law school alumni have affectionately referred to themselves as “Boalties.” The Boalt name has been attached to more than 120 organizations, public forums and positions related to the law school — including its alumni and student groups, endowed chairs, school directory and Facebook page. Over time, in the California legal community, many people simply came to call the law school Boalt Hall.

But the revelation that John Henry Boalt, a 19th-century San Francisco attorney, was virulently anti-Chinese has rocked the school and plunged it into the national debate over what to do when honored historical figures turn out to have unsavory pasts. The Berkeley controversy comes as other schools, such as Stanford, the University of San Francisco and Cal State Long Beach, are reexamining California’s past and changing building names or dropping mascots associated with those who kept slaves or mistreated Native Americans and Asian Americans.

Boalt, the public now knows, was instrumental in pushing the Chinese Exclusion Act of 1882 — the nation’s first immigration ban on a specific group of people. In one influential treatise, he wrote that the Chinese were unassimilable liars, murderers and misogynists who provoked “unconquerable repulsion.” Public sentiment against Chinese immigrants had grown in the 19th century as more than 300,000 came to California as laborers.

A few scholars were aware of Boalt’s racism, but it became widely known only last year when Charles Reichmann, a Berkeley law lecturer, published an op-ed and law review article. This month, law school Dean Erwin Chemerinsky plans to announce whether he will move to strip the Boalt name from the school’s main classroom building and elsewhere.

The dean also must decide what to do about two endowed chairs established by Elizabeth Josselyn Boalt, who specified the professorships carry the family name. She also donated $100,000 in memory of her husband in 1906 to help build Boalt Hall.

Chemerinsky’s decision will follow months of deliberation by a review committee, with the help of a town hall meeting and a survey sent to all alumni, students, staff and faculty. All told, the law school has received more than 2,500 comments divided between Boalt loyalists and critics. In the survey, nearly half wanted to strike the Boalt name, while a third favored keeping it...
Full story at:
http://www.latimes.com/local/education/la-me-edu-uc-berkeley-law-boalt-20181112-story.html
Posted by California Policy Issues at 2:03 PM