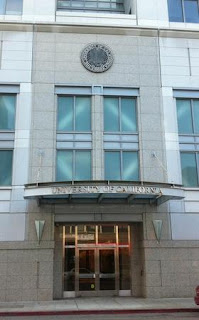 In an email to an organization of former UC chancellors and other officials, former UCLA Chancellor Charles Young calls for serious consideration of the Birgeneau proposals for greater campus autonomy within the UC system by UCOP and the Regents.  In a blog post yesterday, the paper by UC-Berkeley Chancellor Birgeneau et al calling for such autonomy was reproduced along with a (negative) response to the paper by President Yudof. Among other changes, the paper proposed campus-level Boards of Trustees.  See:
http://uclafacultyassociation.blogspot.com/2012/05/we-know-view-from-berkeley-from-ucla.html

The Young email also refers to long-term funding problems from the state he foresees and suggests that greater reliance on tuition will be needed by UC.  However, he argues that the Regents have not fully confronted this issue and need to do so.

The email  is reproduced below by permission:

May 16, 2012: Former Chancellors of the Campuses of the University of California

After much soul searching and with some trepidation, I am writing to lay before you two items of business-- one old and one new.

Much time has passed since our meeting in San Francisco last June.  Unfortunately, not a lot of good news regarding funding of UC has come along in that period.  To me, the picture looks bleaker than ever.  While the Governor touts his proposed ballot measure which would raise income and sales taxes on a temporary basis and pass the amount derived from it, over and above what would be required to balance the budget, on to education, the prospects for the initiative’s passage are far from certain. Moreover, there would likely be no funds left for UC and the CSU system after balancing the budget and covering the obligations to K-12 in response to the requirements of Prop 98.  In short, I believe next year’s state funding is likely to be worse than the current year, which is by all far the worst in that regard UC has ever experienced.

Fortunately, the University’s several campuses have been allowed to take a number of actions that have substantially mitigated some of, but not all, the harm that would have come from the historic trend of cutting State support.  These actions included increasing non-resident enrollment as we proposed, which produced substantial additional net income to partially offset the cuts.  In addition, the amount of tuition and financial aid were both increased by the Regents on the recommendation of the President.  Together, these two changes increased available income and continued to insure access to students who otherwise might not be able to attend a UC campus.

Unfortunately, however, the recommendations which we made last summer with regard to the size of the tuition increases, and the changed use of the State’s appropriations have neither been implemented nor, as far as I can tell, been given serious consideration by UCOP or the Regents. Indeed, as I write this letter, the Regents are meeting in Sacramento to try to persuade the Governor and the Legislature to get more funding, in spite of the sad news provided by the release on Monday of the so-called May Revise, which suggests even further likely cuts than had for next year.

The funding issues we discussed and about which we made recommendations to President Yudof, therefore, remain unresolved.  I hope we can come together figuratively if not literally, to once again press this issue, through to discussion and Regental adoption before the past and current practice of raising tuition just enough to make up some, but not all, of the losses from the State (what we referred to in our letter to President Yudof as asking the students to pay more while getting less) seriously erodes the quality of UC’s education, research and service missions.

If the Regents and administration could be convinced to start pitching this approach to the various publics, internal and external, but especially to the elected officials to whom they now appeal for a greater piece of a constantly receding part of the State General Fund, I believe we could foresee a brighter future for our University.

While the comments above are a continuation of our June discussion, on which we achieved a substantial consensus, I am now going to move into new territory, which I point out I have not discussed with any of you, including our co-chair from last June, Dick Atkinson.  I am, at this point, therefore, clearly speaking for myself.

I am enclosing a copy of a paper entitled, “MODERNIZING GOVERNANCE AT THE UNIVERSITY OF CALIFORNIA: A Proposal that the Regents Create and Delegate Some Responsibilities to Campus Boards,” that has been put forward by UCB Chancellor Birgeneau and authored by him, in collaboration with Provost Breslauer, Vice Chancellor for Administration and Finance John Wilton, and Director of the Center for Studies in Higher Education Jud King.

[Note: The Birgeneau et al document and the Yudof response referenced above and below can be found at:
http://uclafacultyassociation.blogspot.com/2012/05/we-know-view-from-berkeley-from-ucla.html.]

While I do not agree with all the details put forth in the report or with all of the specific language, I believe it is an excellent piece to accomplish what was intended by its authors—to put the matter on the table for serious discussion within UC including the Regents; and to pave the way for discussions with its various publics, including alumni and other supporters, the media, and the legislative and executive representatives of the State.

In my opinion this discussion is long overdue.  Real delegation or devolution from the center to the campuses has been needed for a long time, and that rationale has grown ever stronger in recent years, as UC grew ever bigger and more complicated.  However, under the conditions which exist today (and will, I believe, be more intense in the future) it is necessary for the campuses to be able to move more quickly, to pay more attention to market conditions specific to their situation, to get attention and help from a board more knowledgeable of, and supportive of the campus’ needs and goals than can ever be the case with the Regents.

Some, including editorial writers for the Sacramento Bee and the Los Angeles Times, have argued that the proposed creation of campus Boards of Trustees is a step toward disintegration of UC.  My experience leads me to believe that Presidential and Regental delegation of the authority to local boards allowing them to manage the transactional business of the campuses, would not only make the campuses stronger and more effective, but also free the central administration and Regents to fulfill their more basic and important functions of policy development, strategic planning and oversight of the campuses.

This is the essence of the Birgeneau paper.  Surely, such a proposal deserves open, frank and thorough discussion.  However, I am not sure that this discussion is likely to occur, given the comments by President Yudof in a recent letter to the Regents advising them of Chancellor Birgeneau’s proposal (a copy of which I have also attached).

A number of current and former, faculty, administrators, alumni and friends have come together to bring this discussion about by contacting key administrators, Regents, alumni, friends, the media and State officials.  We would like to have your reaction to this effort, and if you agree with the goals I have set forth, your help in pursuing them.

I know each of you is busily engaged in a variety of competing activities, including the more normal pursuits of retirement.  However, I also know that you hold the future of UC high in your system of priorities, and will respond as your experience and knowledge dictate on this important matter.
Some time ago I informed President Yudof that I was likely to go public in supporting discussion of the Birgeneau proposal and asking him for an appointment to discuss the matter.  For whatever reason that meeting has not occurred.  I am sending him a copy of this letter so that he remains apprised of my activities.  He may choose to weigh in, in response to my comments.  If so, the discussion I suggest will have begun.

In any event, please let me have your reactions and suggestions at the earliest possible time.

Chuck Young
Posted by California Policy Issues at 9:34 AM