Winston Churchill on the Japanese Garden (and the Hotel) 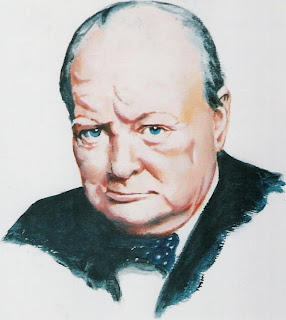 No, not really.  But there is this from Churchill:

"To jaw-jaw is always better than to war-war."

ATTRIBUTION:   WINSTON CHURCHILL, remarks at a White House luncheon, June 26, 1954. His exact words are not known, because the meetings and the luncheon that day were closed to reporters, but above is the commonly cited version. His words are quoted as “It is ‘better to jaw-jaw than to war-war,’” in the sub-heading on p. 1 of the New York Times, June 27, 1954, and as “To jaw-jaw always is better than to war-war” on p. 3. The Washington Post in its June 27 issue, p. 1, has “better to talk jaw to jaw than have war,” and the Star, Washington, D.C., p. 1, a slight variation, “It is better to talk jaw to jaw than to have war.” Source: http://www.bartleby.com/73/1914.html

And there is this from an email circulated by groups seeking to preserve the Hannah Carter Japanese Garden which UCLA proposes to sell:

·   On Tuesday, May 8, Chancellor Gene Block’s office informed Hannah Sowerine, a daughter of Hannah Carter, that he would not talk with her due to the “legal action.” Hannah wrote to the Chancellor and then followed up repeatedly with telephone calls, starting on May 1, requesting a chance to meet with the Chancellor to discuss a number of items including the letter of condolence that he wrote to her sister Anne in 2009. In that letter Chancellor Block promised that “[Hannah Carter’s] name and legacy will live on through the Hannah Carter Japanese Garden, a beautiful reminder of her gracious and giving spirit.”
·   On Wednesday, May 9, the cultural organizations in the Coalition to Save the Hannah Carter Japanese Garden wrote to UCLA Chancellor Gene Block, formally requesting a meeting to discuss a mutually agreeable solution. This meeting request follows on the suggestion from University of California President Mark Yudof that the Coalition continue “discussing the issue with the UCLA campus.”

You can read the two letters referred to above at links below.  The litigation, a court action seeking to stop the ongoing sale of the garden, has been reported in an earlier post on this blog.  My labor relations background tells me that Churchill is closer to the mark here than whatever legal advice the chancellor is getting.  It is always better to talk and see if some accommodation can be reached.  Undoubtedly, someone might say something that could compromise the litigation, if it comes to settling this matter that way, i.e., through lawyers and courts. But it is possible to reach agreement on ground rules for an informal conversation.  The parties can agree, for example, that nothing that is said will be made public or used in litigation without mutual agreement by both sides.

As noted in prior posts, the UCLA Faculty Association does not have a position on the sale of the garden.  However, the matter appears to have been badly handled by UCLA which has emerged as the “heavy” in this dispute. Because the garden was pledged by the university to be preserved “in perpetuity” but is not being preserved in the terms of the sale, the matter also could raise questions in the minds of future major donors to UCLA about the carrying out of provisos in donations. Churchill’s jaw-jaw is worth pursuing, even if it makes university lawyers nervous.

It should be apparent that if there had been more reliance on jaw-jaw, the current hotel/conference center fiasco at the Regents in late March might have been avoided. Get together with those who have an interest in controversies, whoever they are, and at least find out what they have to say. Look for accommodation, if possible. Why is that simple idea so difficult for the administration to understand?

The two letters to which reference was made in the garden groups' email are at: