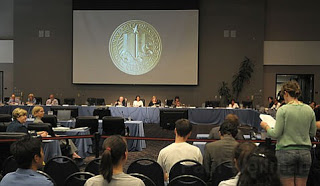 More detail is now available on the agenda items for next week's Regents meeting. On the Los Alamos bid for a renewal of the management contract, there is this:

LANL Contract Competition
The current management and operating (M&O) contract for LANL expires on September 30, 2018. The National Nuclear Security Administration (NNSA) issued the Request for Proposal (RFP) for the follow-on contract on October 25, 2017. A proposal on behalf the University’s team was timely submitted by the December 11 response deadline. If the University team’s proposal is determined to be within the competitive range and fully compliant, NNSA will provide the team with written feedback on the proposal’s significant weaknesses and deficiencies. This written statement will be followed by orals. The amended RFP modified the orals process to include in the discussions not only the proposed Key Personnel team but also representatives from the bid team members. The “Questions and Answers” document that accompanied the amended RFP stated that NNSA anticipates holding orals during March 2018. After orals, the RFP will be amended again to provide instructions for a final proposal revision. As of March 1, the University’s team had not received the written feedback from NNSA nor any updates regarding the schedule for orals. It is still anticipated that the four-month transition period will start on June 1, 2018 to facilitate an October 1, 2018 start date of the follow-on LANL M&O contract. Accordingly, it remains the expectation that contract award would be announced in April or May of 2018.

It's unclear if the lack of response by March 1 is significant. It's also unclear if the current Trump-vs.-California brouhaha will affect the federal response to UC's bid.
Posted by California Policy Issues at 9:16 AM