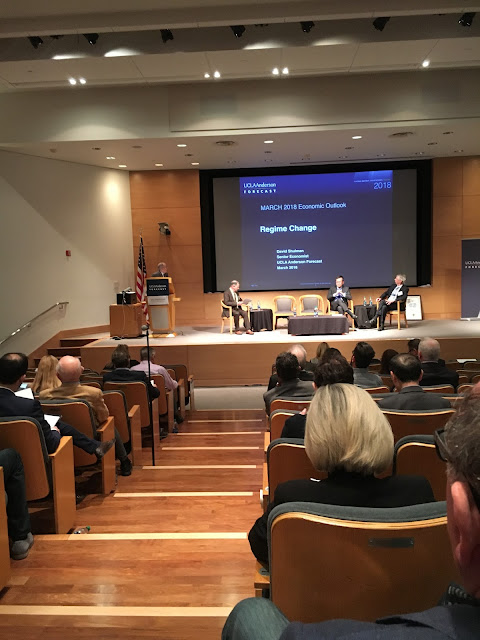 Yours truly likes to point out from time to time that it is possible to hold events on campus in various locations without need for the Grand Hotel. The UCLA Anderson Forecast is a good time to do that. As for the forecast itself, below in italics is the summary (via an email from Anderson). You'll note that no recession is projected. However, the news release/summary doesn't mention the risks that were discussed to the economy from such things as trade wars (which could be conducted, it was pointed out, through financial means - not just tit-for-tat tariffs), over-stimulation of the economy leading to inflation and higher interest rates. Generally, the presenters viewed such developments, if they occur, as more likely to affect the economy adversely in 2020 than in 2018 or 2019.

LOS ANGELES (March 7, 2018) ― UCLA Anderson Forecast’s first quarterly report in 2018 sees a definitive change in the nation’s economy, which is moving from one of sluggish growth and low inflation to one of accelerating growth and moderate inflation. At the same time, with President Trump’s announced plans to increase tariffs on steel and aluminum, things could get worse, as domestic costs rise and foreign producers retaliate. Amid the changes forecast for the national outlook, California, still leading the nation in job growth, is expected to continue to outperform the U.S.

The sudden 10% decline in stock prices and the rise in long-term interest rates in early February signaled what economists label a “regime change,” as the economic environment shifts from one of sluggish growth and low inflation to one of accelerating growth and moderate inflation. Concurrently, monetary policy is transitioning from one of accommodation to one of normalization, with four federal funds rate hikes in 2018; while fiscal policy moves from a moderate deficit to one with trillion-dollar deficits on the horizon. The $300 billion budget compromise during a two-year period, combined with the recently enacted $1.5 trillion tax cuts during a 10-year period, highlighted the demise of the so-called deficit hawks. The budget compromise also called for a substantial increase in defense spending, which ratified the Forecast’s long-held belief that the era of tightening in that sector is over.

The Trump Administration’s fiscal policy also will be playing a major role in increasing the trade deficit. “Because the United States is consuming more than it is producing, it needs to make up the difference through imports,” says UCLA Anderson Forecast Senior Economist David Shulman.

Why the slowdown? “Simply put, the economy is already operating at full employment and is bound by slow labor force growth and sluggish productivity,” says Shulman. Nevertheless, job growth is expected to continue, albeit at a slower clip than in recent years, with the unemployment rate hitting 3.5% in early 2019.

Although housing activity will continue to expand through 2019, it will be far from a boom, thanks to higher interest rates and higher home prices, which exact a toll on housing prices. After recording 1.2 million housing starts in 2017, the Forecast anticipates 1.3 million units in 2018 and 1.38 million and 1.36 million units in 2019 and 2020, respectively.

California continued to be a leader in the nation in job growth, hitting all-time high employment in December 2017. Growth in net new jobs in the Bay Area in 2017, while still significant, eased toward the end of the year, but that was offset by increased growth in the Inland Empire, San Joaquin Valley and Sacramento and the Delta. During the last three months of 2017, employment growth accelerated in most of the state, with inland regions outpacing some of the faster growing, tech-dependent regions. It is expected that California’s unemployment rate will have its normal differential to the U.S. rate at 4.3% by the end of the forecast period (2020).

With a budget resolution calling for a significant increase in the purchase of sophisticated defense durable goods, demand for manufacturing and engineering in Southern California may increase, as will demand for technological developments throughout the state. “The increase in investment is likely to be in technologically advanced equipment and software. Thus, the California tech industry will see a bump in demand,” says UCLA Anderson Forecast Director and Senior Economist Jerry Nickelsburg. “To achieve this, more labor will be needed and wages will have to increase to draw the labor in, either from the sidelines or from outside the state.”

Of course, there is also the governor's forecast: