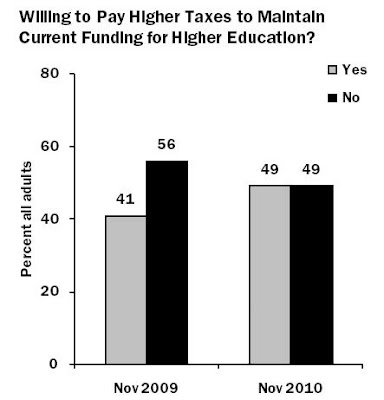 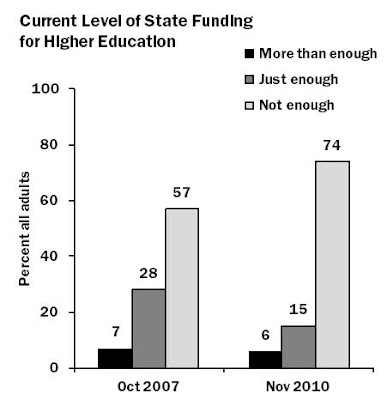 A new poll on public higher ed is out from the Public Policy Institute of California (PPIC). In broad terms, Californians are evenly split on whether taxes should be raised to support higher ed. But they oppose tuition increases. They are more likely to say that not enough is being spent on higher ed than to support raising taxes.

PPIC summarizes the findings as follows:

About three-fourths of Californians say state funding for public higher education is inadequate.

Most Californians favor more money for higher education even at the expense of other state programs.

Almost 60 percent of all parents -- and 72 percent of Latino parents -- are very worried about paying for college. Most Californians say the state’s three college systems are doing a good or excellent job.

While Californians are most likely to identify the state budget situation (74%) or overall affordability (60%) as a big problem in the higher education system, far fewer see quality as a big problem (22%). And as they have since October 2007, strong majorities of residents say each branch of the system is doing a good or excellent job. They view each similarly, with 62 percent saying the California State University system is doing at least a good job (9% excellent, 53% good) and 64 percent saying the same for the University of California (15% excellent, 49% good) and community college system (13% excellent, 51% good).

The full report is at http://www.ppic.org/content/pubs/survey/S_1110MBS.pdf


What is apparent is that there is a subset of Californians who like the job UC and the other units are doing in higher ed, worry about inadequate spending on higher ed, but don't want either more taxes or more tuition to pay for it. For them, a little music: