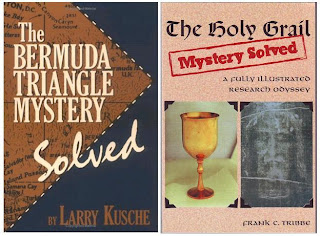 There are mysteries out there that are reported to be solved. And if you read the earlier post on the mystery of the missing December Regents meeting, I can now report that the mystery has been resolved.

To recap: The Regents in November received the Yudof plan for modifying post-employment benefits (pensions, retiree health care). However, the November meeting was an information session regarding those benefits - no decision was made. The decision date was set for a special December meeting which was not listed on the UCOP/Regents website.

According to the email below, that session is set for December 13 and will be posted on the site about 10 days in advance, i.e., around December 3.

Update: A good write-up on the upcoming Regents meeting appeared today in calpensions.com. Below is an excerpt:

UC pensions: from free lunch to years of pain (excerpt)

SAN FRANCISCO — UC Regents may vote on a costly retirement reform plan next month that officials say will not only lower benefits, but could squeeze faculty recruitment, research and medical centers for two or more decades. An institution known for its prized collection of intellects did something two decades ago that in hindsight now seems unwise. It stopped making employer-employee contributions to the pension system, getting by on strong investment earnings. A staff report to the Regents in September said that if normal contributions had continued since 1990, the University of California retirement system “would be approximately 120 percent funded today.”

But as of last July the system was 73 percent funded using the market value of assets and 87 percent funded on an actuarial basis, which spreads gains and losses over five years and won’t fully reflect the 2008 stock market crash losses until 2013. “The idea of having a defined benefit and not paying into it is insanity,” Richard Blum told his fellow Regents at a meeting this month. He said he began urging that contributions be restarted several years ago. A Regents faculty advisor, Dan Simmons, said the current problem is the result of failing to resume contributions seven or eight years ago. He said a faculty task force and others urged a restart “I think even before Regent Blum began pushing that issue here.”

…UC would like to get state funds for retirement, like California State University and the community colleges. But one of the consequences of stopping contributions two decades ago is that UC retirement is not part of the state budget. Now the timing for getting UC retirement back into the state budget could not be much worse.

…UC officials say not getting state money is a triple hit on the retirement system. The state provides a third of the UC budget. The rest comes from medical centers, federal sources, grants and other operations. Without an increase in the state share, UC cannot equitably raise retirement contributions from the other two-thirds of its operations. So every $1 not received from the state costs UC an additional $2 from other sources.

…For additional contributions UC is exploring several possibilities, including restructuring debt and borrowing at low interest rates from its pool of short-term investments…

Unkinder editorial below:
Time for UC regents to get serious about pensions (excerpt):

Subtitle: AS UNIVERSITY of California regents next month consider proposed changes to pensions and other retirement benefits for employees, one thing is clear: The adjustments don’t go nearly far enough.

After two decades of mismanagement, the huge cost of digging out of the financial hole threatens to undermine the heart of the nation’s greatest public university system. Clearly, it’s time to rethink priorities — and re-examine the culture under which everyone, from faculty to staff secretaries, enjoys the same benefit structure.

The top-rate tenure-track faculty and the great minds at the medical centers must be retained. Without them, UC would be just another ordinary collection of colleges. Yet those elite comprise less than 15 percent of the employees in UC’s pension system.

Not to sound too harsh, but the other 85 percent are fungible. If they don’t like their salaries and benefits, they can be replaced. To be sure, we appreciate the work they do. However, UC, in its quest to preserve the best and the brightest, can no longer afford to offer the same packages to the rest of its employees...