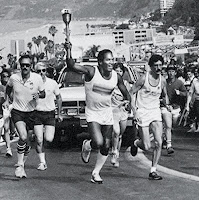 Notice from UCLA Events and Transportation: This Thursday, July 23, the Special Olympics Torch Run will make its way through Westwood Village from 2:15 p.m. to 3:15 p.m. The Torch Run will begin just west of the corner of Westwood Boulevard and Le Conte Avenue and proceed south on Westwood Blvd, turn right onto Kinross Avenue and another right onto Broxton Avenue, and arrive at the Torch Run Ceremony location at 1000 Broxton Avenue. For those who need to travel through the Village during this time, it is advised to avoid the area around Westwood Blvd and instead take Gayley Avenue as an alternate route. The Torch Run will create a number of traffic impacts and possible delays in the Westwood Village area, including impacts to public transit service. During the event, southbound Westwood Blvd will be reduced to one lane from Le Conte to Kinross (with both northbound lanes remaining open). Kinross Avenue (between Westwood Blvd and Gayley Avenue) and Broxton Avenue (between Le Conte and Kinross) may also experience some delays during the event.

[The photo shows the 1984 Olympic torch carried up the California Incline in Santa Monica by O.J. Simpson. Both the Incline and Simpson have other problems at present.]
Posted by California Policy Issues at 2:59 PM