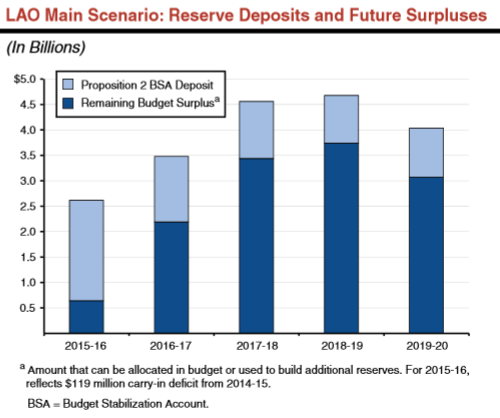 The Legislative Analyst's Office (LAO) has issued a report that should be helpful to UC in pushing the state for more funding.  Budget accounting has been complicated by the rainy day fund provisions of Prop 2 that the voters recently approved.  In effect, changes in reserves over the year reflect the gap between spending and revenues.  If reserves go up, it is because spending (not counting money diverted to the rainy day fund) is below revenues, i.e., we are running a surplus.  If reserves go down, we are running a deficit and spending is exceeding revenues.  The LAO's estimates are that we have a deficit in the current year of $1.2 billion.  This is close to what the governor estimated back in June, although no one used the word "deficit."  LAO estimates that the state will take in about $2 billion more than the governor estimated but spending is up, too.  However, for next year and beyond, the state goes into surplus as the chart above from LAO estimates and reserves grow.  You can view the bars above as estimated surpluses.

Bottom line: The outlook projected for next year is sunny and just in time for the regents-governor tuition-funding conflict over the budget for that year.  Of course, projections are just that.  They could be wrong.  But there is room to negotiate for the next budget year which is what the regents are considering.

The LAO report is at http://lao.ca.gov/reports/2014/budget/fiscal-outlook/fiscal-outlook-111914.pdf
Posted by California Policy Issues at 12:03 PM