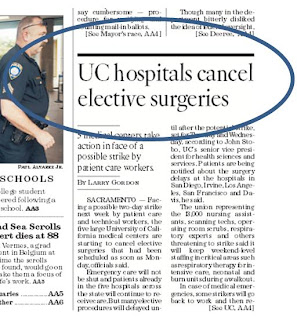 From the LA Times today:

Facing a possible two-day strike next week by patient care and technical workers, the five large University of California medical centers are starting to cancel elective surgeries that had been scheduled as soon as Monday, officials said. Emergency care will not be shut and patients already in the five hospitals across the state will continue to receive care. But many elective procedures will delayed until after the potential strike, set for Tuesday and Wednesday... At UCLA's hospitals in Westwood and Santa Monica, ...administrators are planning to hire 600 replacement workers through agencies and are preparing to train them and move them past picket lines...While UC is seeking an injunction to prevent the strike, both sides said they now consider the walkout likely, starting at 4 a.m...

UPDATE: Apparently, food service for students will be affected by the strike:
http://dailybruin.com/2013/05/17/ucla-housing-will-alter-services-in-sympathy-with-striking-patient-care-technical-workers/

Note: Much of the public comment session at the Regents on Wednesday was focused on the impending strike.  President Yudof began with a statement about it.  Most of the speakers thereafter were from the AFSCME local involved in the dispute and - after a demonstration began - the room was cleared.  You can hear it at the link below: