It's always good to hit the target but...

As we have noted in prior postings, the state received what seemed to be a windfall of $4+ billion in income tax revenue early in 2013 which seemed possibly related to taxpayer concerns about fiscal cliffs, etc.  But the receipts did not reverse later and a key indicator is what happened to income tax receipts in April, the big month for that tax.

According to the state controller, April income tax receipts came in as expected under the governor's budget estimate for the current fiscal year.  See below: 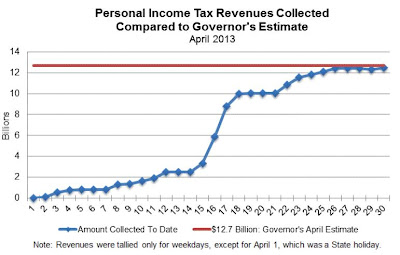 So it appears the windfall, probably a one-time event, remains.  As we have also pointed, much of the money will probably go to K-14 under Prop 98.  However, more is better than less for UC.  We miay not get more, but if there had been less, we likely would have gotten a share of it.

And even when you hit the target, things don't necessarily go exactly as planned: