For Mothers' Day: A complicated story of two mothers involving a UCLA student in 1957 and a TV star 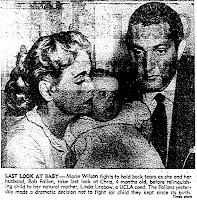 For a time, the LA Times had a blog which recounted old stories from the newspaper.  On Oct. 16, 2007, the blog provided background on a complicated story from 1957 involving an unmarried UCLA student who became pregnant and initially gave up her baby for adoption.  At the time, being an unwed mother was something of a scandal and a quiet adoption was the standard solution.  In this case, however, the student had second thoughts after a few months.  She didn't sign the papers that would have finalized the adoption and demanded the baby back from the adoptive parents.  Perhaps this story would not have made the news but in this case the adoptive mother was Marie Wilson who had starred in a a popular radio and then TV situation comedy, "My Friend Irma."  A lnk to a video from the series can be found below.  As a result, the story became a headline:

At first, Wilson threatened a lawsuit to block the return but eventually she relented and the baby was returned at a doctor's office in Westwood.  The child, who is likely alive, may not even know of this history.

You can find the story at http://latimesblogs.latimes.com/thedailymirror/2007/10/change-of-heart.html.

An episode from "My Friend Irma" can be seen at:

By the time of the adoption story, the program was no longer on the air.  The Times editorialized that adoption laws were flawed to allow such situations and suggested that the natural mother had just temporarily "parked" her "inconvenient" baby with the prospective parents.