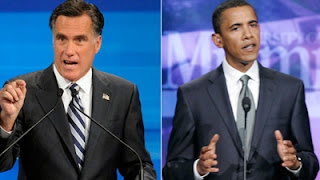 With the presidential debate coming up on Oct. 3, and with your state voter pamphlet probably arriving around now, you may have an interest in a program offered by the UCLA Luskin School of Public Affairs later this month (October 17).  Below is an announcement and below that is a link for registering to attend:

After the horse race is over and Election 2012 has been decided, the business of governing is going to get very difficult very quickly. With budget cuts looming and taxes set to rise, voters are struggling to understand competing visions for the future. Is a balanced compromise possible in an atmosphere of extreme partisanship? How does the rhetoric of an election year match our fiscal reality?

(Full disclosure: Yours truly was involved in the planning of the Oct. 17 event.)

For the historically minded, he first televised presidential debate - Kennedy/Nixon in 1960 - can be seen at:

It's a two year degree program, usually divided into five semesters. There are also those who deal with athletes who need a private physio therapist to ascertain their health condition in a frequent interval. Step 3: Determine the goal(s) you would like to achieve during each session.
Here is my blog post - porenaa.livejournal.com