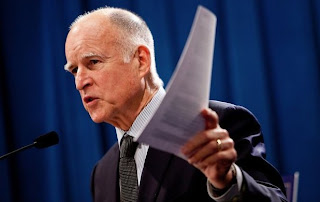 As readers of this blog will know, public pensions have been an issue in California and for UC.  Recently, Gov. Brown signed a bill that modified public pensions in the state - with exclusions including an exclusion for UC which modified its own plan in 2010.

Under a cash balance plan, the worker has a tax-favored account into which contributions are made (employer and/or employee) similar to a defined contribution or 401k plan. However, the return on money in the account is guaranteed by the offerer.  The plan is a savings plan with a fixed interest rate; the worker does not do the investing.  The guarantee puts some risk on the offerer so the plan is similar to defined benefit in that regard. However, at retirement age, the worker has a lump sum, not an annuity. He/she could use the lump sum to buy an annuity from a private insurance carrier although the costs of such retail annuities can be high.

For the offerer, the higher is the interest rate guaranteed, the greater is the risk since actual investments might not cover the guarantee.  For the worker, the lower is the guarantee, the less attractive is the plan.  Note that most workers without any pension (defined benefit or defined contribution) can open an IRA or some similar tax-favored plan.

A bill in the legislature proposed that the state create a cash balance plan for workers without pensions in the private sector.  Brown insisted that the bill be modified require a study first of economic and legal feasibility and then a separate vote by the legislature actually to establish the plan - if it chooses to do so - down the road.  With that modification, he has signed the bill.  See below from the Sacramento Bee (excerpt):

Legislation designed to pave the way for a private retirement plan affecting millions of California private-sector workers was signed into law Friday by Gov. Jerry Brown. The goal is to create a savings program in which workers who have no access to a pension can count on a guaranteed rate of return for contributing about 3 percent of their salary. Brown's signing of Senate Bill 1234 signals support for the program, but he signed separate legislation, Senate Bill 923, that requires a feasibility study and a final vote by the Legislature before launching it. Sen. Kevin de León, who teamed with Senate President Pro Tem Darrell Steinberg to push SB 1234, said Brown's signing could lead to creation of a "national model for retirement savings."

...Unlike a public pension, de León's program would guarantee participants a minimal rate of return for contributions made via payroll deduction. The Los Angeles Democrat contends that neither the state nor private businesses would incur risk. Returns would be assured by private insurance underwriters...
Full story at http://www.sacbee.com/2012/09/29/4864711/jerry-brown-signs-package-to-advance.html
It is interesting to note that the governor signed the modified legislation without any fanfare.  The signing is noted along with a listing of a rash of other unrelated bills he signed or vetoed on his website at http://www.gov.ca.gov/news.php?id=17767.

Post is really very intereste and informative and i always appreciate the post which is full of its swing color.
pension loan
pension release