Finally, an explanation of why getting the details right on the pension didn't matter to the Guv 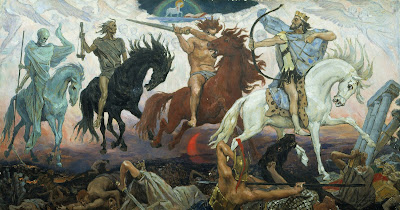 Why worry about anything so trivial as the UC pension system and what the implications of the Tier 3 pension deal would be when apocalyptic doom is approaching anyway? Columnist Joe Matthews explains the Guv's preoccupations:

Is California being governed by apocalyptic French philosophy? Oui. But it’s not the end of the world. Indeed, apocalyptic French philosophy may finally provide clarity for those of us long puzzled by that great California mystery: What is the meaning of Jerry Brown? In recent years, our governor’s statements have taken an end-of-days turn, Jerry channeling Jeremiah. The governor has warned of nuclear holocaust, wildfires consuming the entire state, the demise of Silicon Valley if his water plans aren’t adopted, and the apocalypse if we don’t curb carbon emissions. Last month, the governor went to Palo Alto for the latest of unveiling of the Doomsday Clock, a timekeeper for the annihilation of mankind. (It’s just three minutes to midnight, humans.) Where is he getting all this angst? Here’s one answer: Brown is a longtime friend of the French techno-philosopher Jean-Pierre Dupuy, who practices what is called “enlightened doomsaying” from academic perches at Stanford and Paris’ École Polytechnique. ...Humanity is doomed to destroy itself because we have lost our sense of the sacred. We no longer recognize the way our sacred origins—not just faith and religion, but other rituals and traditions that remind us how many things are beyond human control—shape us and all our modes of thought, even reason and science. ...That may sound awfully French, but (Dupuy) grounds his philosophy in a classic California story: Alfred Hitchcock’s film Vertigo, a tale of humans falling all over Northern California, from the Golden Gate Bridge to Mission San Juan Bautista. Dupuy calls the film “the womb from which I am issued,” and sees humanity’s rush into Armageddon in the fictions within that movie’s fictions, particularly Jimmy Stewart’s attempts to impose a false reality on Kim Novak’s character...

Go figure (if you can) at http://www.foxandhoundsdaily.com/2016/02/california-needs-to-embrace-the-apocalypse/

Maybe this will help: