End of the Freeze 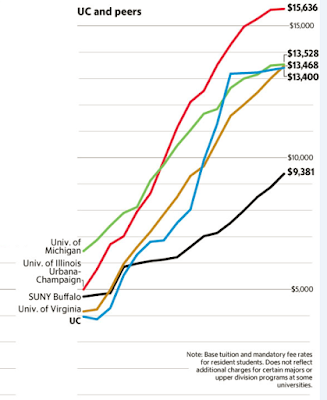 
The tuition freeze at California’s public universities is set this fall to stretch into its fifth year. But nothing lasts forever.
The University of California and California State University are now looking beyond the end of their budget deal with Gov. Jerry Brown, which will hold costs flat through next summer. UC has tentatively proposed at least two years of increases beginning in the 2017-18 academic year, and CSU launched a discussion about the future of its financial stability last week at a meeting of its governing board.
The conversations sound a bit different this time around: With state funding on the upswing, the systems are looking to get out in front of the next crisis. Both appear to be embracing the idea of smaller annual fee hikes tied to inflation, an approach long recommended by the state’s nonpartisan fiscal analyst...
Full story at http://www.sacbee.com/news/politics-government/capitol-alert/article60386766.html

Note on the chart that UC has more or less caught up with the U of Michigan, home of the "Michigan Model."
Posted by California Policy Issues at 8:23 AM