Prop 30 Passes So No Trigger Cuts for UC 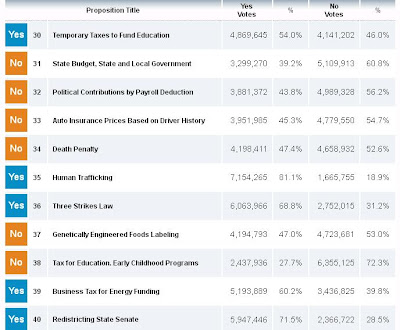 Above are the ballot proposition results as of around 5 AM this morning from the California Secretary of State with about 95% of the results.  [Click image to enlarge.]  Prop 30, the governor's tax initiative endorsed by the Regents, has passed.  Prop 39, the corporate loophole tax, which also adds some money into the general fund despite its earmark for "green" projects, also has passed.  The Munger school tax (Prop 38), which was seen as a rival to the governor's tax, did very poorly as polls predicted.

With the passage of Prop 30, the budget trigger - that would have cut $250 million from UC - is dead.

For latest news you have to visit web and on the web I found this web page as a best website for
latest updates.