Even if you have the Marxist view on the November ballot initiatives... 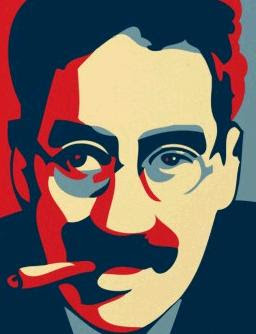 Groucho Marx, that is, and his academic perspective:

Today is the day for hearing about all eleven of them.

Campus Program on Ballot Propositions: Nov. 1
The UCLA Luskin School of Public Affairs and the UCLA Institute for Research on Labor and Employment present:

California voters face big decisions on the 2012 ballot initiatives. From tax policy to the death penalty to genetically modified food labeling, a lot is at stake on the ballot. Join us for an educational and informative forum to analyze the initiatives.

RSVP
rsvp@publicaffairs.ucla.edu; Lunch will be served.

While in office, FORMER CALIFORNIA GOVERNOR GRAY DAVIS made education a top priority, signing legislation to strengthen California's K-12 system, increasing accountability in schools, and expanding access to higher education.  While presiding over California during an economic expansion, he made record investments in infrastructure, created four Centers of Science and Innovation on UC campuses, and expanded state health insurance for an additional one million children.

And don't forget that the day after Election Day, there will be a program on the future of UC and its funding outlook (whatever has happened to the initiatives):


DATE: Wednesday, Nov. 7, 2012
TIME: Noon-1:30 pm
LOCATION: Faculty Center, California Room
LUNCH: Complimentary Sandwiches and Beverages will be served.
RSVP: ucfa@earthlink.net so we can get an accurate food count.  (Cut and paste this address into your email.  You can't do it from here.)

APRIL 1982:
ANCIENT CALIFORNIA HISTORY “The interconnected complications surrounding the upcoming state budget for 1982-83 defy comprehension by most state legislators let alone the public at large… Governor Jerry Brown is projecting a $3 to $4 Billion shortfall in revenues for 1982-83. This is against the Governor’s $2.1 Billion estimate in his January proposed budget…It would be wrong to think of the current budget difficulties as something temporary, which will disappear when good economic times come back,” (April 1982, UCLA Faculty Assn. Newsletter).
NOV. 6, 2012:
ELECTION DAY In California, if Proposition 30 does not pass, UC is in serious financial trouble. If Prop 30 does pass, UC is still in serious financial trouble.
NOV. 7, 2012: PROGRAM FOR FACULTY ASSN. SPEAKERS’ FORUM The UCLA Faculty Assn. has asked 3 scholars and experts on state and UC policies and economics to unravel some of those continuing interconnected complications and offer some simpler, alternative models for UC funding for the future.  After the speakers have finished, then Prof. Sylvia Hurtado, director of the Higher Education Research Institute, will comment on the presentations, followed by Q and A from the audience.

SPEAKERS:
Professor Christopher Newfield, UCSB, English Department, author of Unmaking the Public University: The Forty Year Assault on the Middle Class, (Harvard University Press, 2008) and who reports regularly on a popular blog site, “Remaking the University,” http://utotherescue.blogspot.com/.
Professor Robert Anderson, UCB, Economics and Mathematics, past Chair of the Academic Council, 2011-12 and who has served on the systemwide Task Force Working Group on Post-Employment Benefits at UC.
Professor Daniel Mitchell, Emeritus, UCLA, Anderson School of Management and Luskin School of Public Affairs, has served on many systemwide committees, and who tracks California budgetary issues and reports regularly on the Faculty Association blog site.  (The very blog you are reading!)