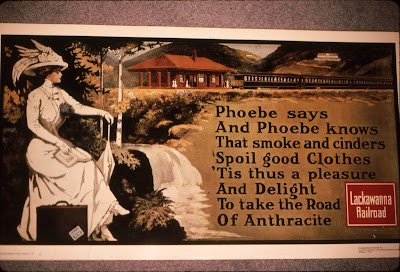 Phoebe Snow was an advertising character whose white costume was not sullied by coal burned in the locomotive because the railroad she rode used anthracite coal (hard coal) rather than bituminous (soft). Apparently, UC quietly divested its portfolio of coal, soft or hard, albeit without an official divestment policy, after the governor said it might be a good idea to do so. One cannot help noting that coal is not used as a fuel in California, nor is it mined. In contrast, California is a major oil producer (and consumer) and, thus, while students may be pushing for fossil fuel divestment, politicos like the governor have shown no enthusiasm for ditching oil. Just an observation.

An article in the LA Times indicates the coal divestment was revealed at yesterday's meeting of the Regents' Committee on Investments. http://www.latimes.com/local/education/la-me-ln-uc-coal-20150909-story.html  As usual, we will later archive the audio of the meeting indefinitely since the Regents won't.
Posted by California Policy Issues at 8:46 AM