Cash report is a puzzle 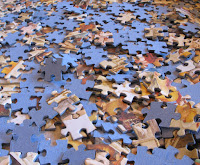 The state controller's cash report for the first two months of the fiscal year is out. It is a bit of a puzzle, although two months is not very far along in a twelve-month fiscal year.

Apart from that puzzle, about a fourth of the extra revenue came from the personal income tax, a reminder that the condition of the state budget is heavily dependent on a volatile source.

You can do your own puzzling over the cash report at http://www.sco.ca.gov/Files-ARD/CASH/02_August_2015.pdf
Posted by California Policy Issues at 9:06 AM