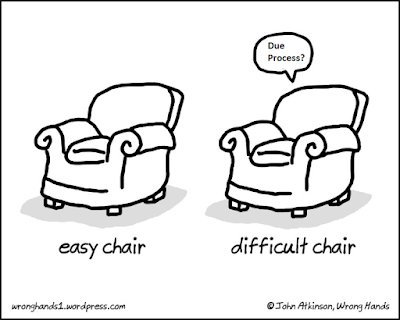 The debate this past week at the Regents on the tolerance/intolerance resolution should be a reminder of another contentious issue that the Regents have yet to resolve. The powers-that-be at UCOP are supposed to be coming up with some mechanism to deal with campus complaints of sexual harassment and assault that will somehow provide due process to the accused. So far, the tension between innocent until proven guilty and guilty until proven innocent has not been easy for universities to resolve. External courts tend to focus on due process for the accused. Universities seem to be pushed by the federal govt. (executive branch) toward the latter. The problem is perhaps more intense for public universities (such as UC) than private. But even private institutions have had difficulty. From the Chronicle of Higher Ed:

A federal judge on Thursday ordered Middlebury College to reinstate a student who had been expelled over alleged sexual misconduct during a study-abroad trip last year, the Associated Press reports, citing court documents. The student, identified only as John Doe, was initially exonerated by the School for International Training, which ran the study-abroad program, in an unnamed foreign country, in which both John Doe and his alleged victim took part. Unhappy with the school’s findings, the victim, identified as Jane Doe, said she intended to file a complaint with the U.S. Education Department’s Office for Civil Rights, which is already investigating more than 100 colleges over their response to reports of sexual misconduct on their campuses. Middlebury then began its own investigation of the matter. After a five-month inquiry, it found John Doe to have sexually assaulted Jane Doe, and it expelled him. The college’s inquiry apparently also found fault with the School for International Training’s investigation. After exhausting his appeals at Middlebury, John Doe sued. He also sought a preliminary injunction blocking his expulsion while his lawsuit was heard. In his order on Thursday, Judge J. Garvan Murtha of the U.S. District Court in Brattleboro, Vt., wrote that the case’s unusual history, in which one academic institution cleared John Doe while another expelled him, created “a unique situation.” Still, he agreed that John Doe, a senior, should not have his education interrupted before his lawsuit could be heard. In a statement Middlebury said, “We are considering our legal options, but at this time we are obliged to comply with the court’s order.”

The Middlebury case reminds one of the recent UC-San Diego and U of Michigan cases which this blog has previously noted: http://uclafacultyassociation.blogspot.com/2015/09/more-straws-in-wind.html

All we can say to the Regents is "if at first you don't succeed...":

Email ThisBlogThis!Share to TwitterShare to FacebookShare to Pinterest
Labels: Middlebury, U of Michigan, UC-San Diego