What Ever Happened to the Campus Climate Survey? 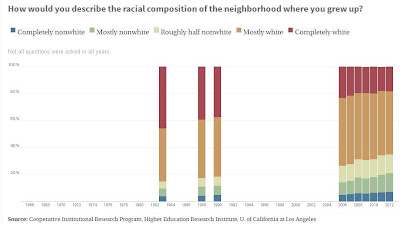 The Chronicle of Higher Ed published the chart above back in January based on national freshmen reports about the neighborhoods from which they came. [http://chronicle.com/article/BackgroundsBeliefs-of/136771] The data were gathered by UCLA's Higher Education Research Institute (HERI).  [Click on the chart to enlarge and clarify.]  It was around that time that UCOP sponsored a "campus climate" survey of all the campuses.  The survey had been announced with great fanfare after various racial incidents: http://www.ucop.edu/newsroom/newswire/img/16/16489629294e7b6333135a8.pdf.  As we have pointed out on this blog from time to time, there is no sign of any results from that survey as yet despite the considerable expense in taking it.  (At least yours truly found no data from the survey on the UCOP website as of this morning.)  UCLA's faculty welfare committee expressed reservations about the survey methodology, particularly its length and whether a representative sample would result.

But maybe there is no use in wondering about what happened to the survey: