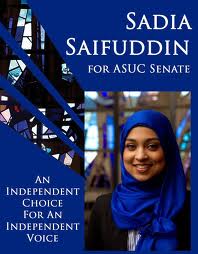 Sadia Saifuddin, who is studying social welfare at UC Berkeley, is believed to be the first Muslim who would represent students on the Board of Regents

A UC Berkeley senior who majors in social welfare and has been active in student government and Mideast issues is expected to become the next University of California student regent, joining the board that sets policies for the 10-campus system.A special regents committee has nominated Sadia Saifuddin, 21, of Stockton to be the student regent in 2014-15. Confirmation by the full Board of Regents is expected next month. For the next year, Saifuddin would be a regent-designate, able to participate in all discussions but without voting rights until her one-year term as a fully empowered student representative begins in July 2014, officials said....  Saifuddin said a priority would be keeping tuition from increasing again...

Saifuddin has been a senator in UC Berkeley's student government and founded a UC systemwide committee seeking to improve conditions on campus for minority students. She was co-sponsor of a controversial student Senate resolution that called for the UC system to divest companies that do business with the Israeli military in its occupation of Palestinian territory; the UC Berkeley student Senate narrowly passed that nonbinding resolution in April after an emotional debate.

The student regent for 2013-14 is Cinthia Flores, a law student from UC Irvine...