Budget Signed: Smile But Then Scroll Down 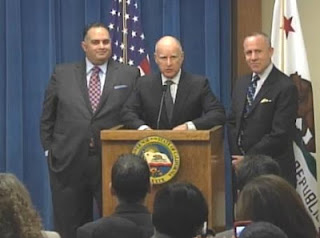 It was generally all smiles and laughter at the state budget signing this morning as the photo above shows.  Contrast that photo with the one below at the 2011 budget signing when the governor had to sign a budget - after getting no GOP support for putting a tax measure on the ballot - that assumed a phantom $4 billion in revenue to make things seem in "balance."  No smiles there. 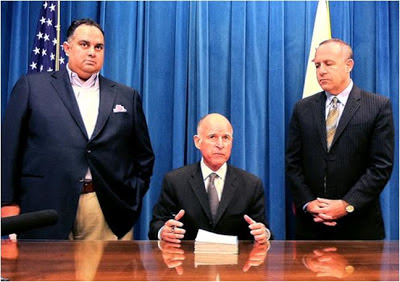 In any case, there appear to be no surprises for UC in the budget. [But see the updated post above on the governor's veto of his own online education proposal.]  The governor line-item vetoed a small appropriation for a building at UC-Merced but the veto message says the funds are contained in another bill.  UC gets an addition to its budget of $125.1 million with stipulations about reporting certain performance measures and not raising tuition.  There are supposed to be some kind of limits on the capital budget but what appears to be involved are state-funded projects.  Such limits seem unlikely to affect projects such as the UCLA Grand Hotel which are funded initially by non-state sources but may lose money in the future that will have to come from somewhere.

The official budget figures are as below (in billions of dollars - figures may not add up due to rounding):

Note that the current year (soon to end) shows a bigger surplus than the coming one. There is some borrowing from the cap and trade program in the upcoming year assuming the governor's May Revise proposal is still intact.  Without counting such borrowing as de facto revenue, the upcoming surplus and reserve would be in more razor thin than they are.  Any economic bump in the road could derail this train.  So hold your applause until next June.

In short, to continue our mixed metaphors, the rainy day fund reserve won't protect us from much more than a sprinkle.  We will have to rely on the smiles in that case:

Dan: The one quick surprise is that he vetoed his own requirement on online education.

I have updated this post and added the next one to reflect that veto.