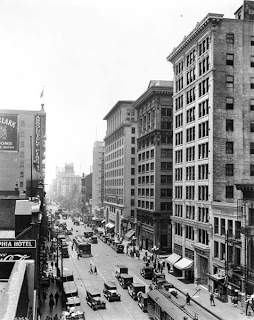 UC Extension operated out of a building at the corner of 8th Street and Hill Street in downtown LA in 1931. Prof. Toby Higbie indicated in a comment on my last Extension catalog posting that UCLA did not directly run the Extension program; rather it was administered from Berkeley. However, the UCLA provost served on the board that administered the LA operation. (The photo above is of 4th and Hill in the late 1920s; I can't find an old one of 8th and Hill.) Some of the course offerings appear to be by UCLA faculty members.

Extension apparently had various sites for courses in downtown LA including the Central Library. It also operated at the old Vermont Avenue site where the original UCLA campus was located. That site had become LA Junior College (now LA City College) after the move to Westwood. Courses are listed at taking place around the LA region including Beverly Hills and Glendale and as far away as Redlands and Santa Ana. Many of the courses involve business topics, education (for school teachers), and language. One is described as a "non-technical course designed to enable women to transact their own business."

You can access the January-February 1931 catalog below:
Open publication - Free publishing - More 1931