How the (budget) sausage is being made 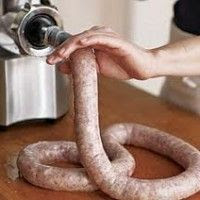 You are not supposed to want to know how sausages are made. The making of the state budget sausage - as a prior post noted - is supposed to happen in the legislature by June 15. For any kind of tax extension or tax-related ballot measure, a 2/3 vote is needed which means a few GOP legislators must go along.

Some Republicans are now moving toward the tax extension vote idea, precisely because they think it can be defeated. To make sure it is, they have suggested they will go along with a ballot measure only if the taxes cease on July 1 so that voters would in effect be voting in November or whenever on tax increases rather than extensions.

What they seem to want is a budget that "kicks the can down the road." That sound bad but in fact the Legislative Analyst has pointed to the fact that the Brown budget plan does more than just balance the budget in the common-sense English definition of balance, i.e., one year's inflows = outflows. It also proposes to fix past sins (essentially debt) that has accumulated. The Leg Analyst has noted, as has yours truly, that a multi-year workout - which is a non-pejorative way of saying kick the can down the road - is an option that should be considered.

Or you can see it directly: