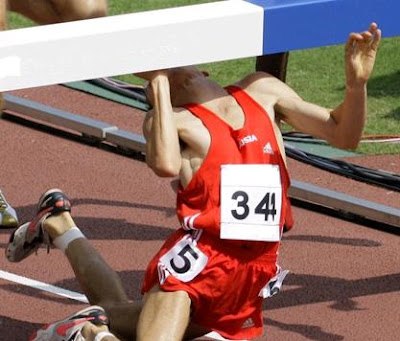 When the University of California, Berkeley, announced it was eliminating five varsity teams last fall, the decision was sold as a necessary sacrifice by a university reeling from severe cuts in state aid. Four months later, the university finds itself in a dilemma caused by a consequence of that decision that has been largely overlooked in the debate over the cuts. The elimination of two women’s teams — lacrosse and gymnastics — threw the Cal athletic department out of compliance with the federal gender-equity law known as Title IX. Without the five teams, the university, based on numbers it provided, will have to add 50 spots for women and eliminate 80 spots for men to meet Title IX requirements.

…But there is a chance it will never come to that because the university is considering reversing course. After originally saying it would take at least $80 million in private donations to reinstate the five teams, officials recently said they would accept $25 million to guarantee the return of the teams for a shorter time if supporters could demonstrate a long-term plan for financing the teams. …An announcement is expected Thursday.

…Cal’s decision to cut the athletic teams followed a year of heated debate on campus that questioned why the athletic department was receiving millions of dollars in university subsidies when the rest of the campus was suffering through tuition increases, faculty furloughs, staff layoffs and other cuts. It did not help that the university had recently embarked on a $321 million renovation of its football stadium and the construction of a $150 million high-performance center for athletes, both privately financed.

…Cal’s 40 percent female participation rate places it behind other Pacific-10 Conference members, including Stanford, Southern California and U.C.L.A., according to numbers the universities reported to the federal Education Department…