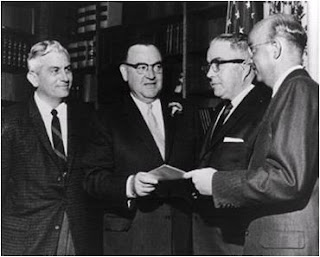 Once upon a time, UC president Clark Kerr gave the Master Plan to Governor Pat Brown which set up a division of labor between the three segments of higher ed. That was then; this is now:

Gov. Arnold Schwarzenegger signed legislation Tuesday to allow California State University campuses to award a doctoral degree in physical therapy and, at three campuses, a doctorate in nursing practice. Assembly Bills 2382 and 867 are exceptions to the state's current practice of giving the University of California system exclusive jurisdiction to award doctoral degrees, except joint doctorates.

Authority for CSU to issue a doctor of nursing practice degree will expire in July 2018 unless extended by the Legislature. Participating campuses cannot cumulatively enroll more than 90 students in the program.