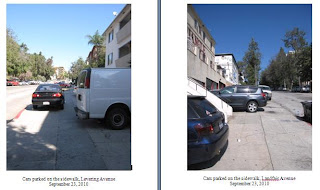 Prof. Donald Shoup in the Dept. of Urban Planning has been campaigning to end illegal parking on the sidewalks around the UCLA campus. Prof. Shoup, the author of The High Cost of Free Parking, began trying to get Jack Weiss - when he was the LA City councilman for the area - to have the police enforce the law against such parking. Parking on sidewalks blocks access for ordinary pedestrians and, particularly, for handicapped persons. A lawsuit against the City has been filed on that basis.

Let's just say that when Weiss was in office, he was not known for responsiveness. There is now a new city councilman, Paul Koretz, and Prof. Shoup has continued his campaign, as per below. You might be interested:

I have attached two photographs I took of cars parked on the sidewalk in North Westwood Village today, Thursday, September 23. None of the many cars illegally parked on the sidewalks in North Westwood Village had a citation, but every car parked at the curb on the other side of the street had a citation for parking on the street during street-cleaning hours.

You may not be aware of the many emails and letters sent to your predecessor, Jack Weiss, about how parking on a sidewalk violates both the California Vehicle Code and the Los Angeles Municipal Code. More important, the City’s policy of not citing cars that block the sidewalks in North Westwood Village may violate the Americans with Disabilities Act, which requires that sidewalks be accessible. The U.S. Supreme Court’s decision in Barden v. Sacramento sets a nationwide precedent requiring cities to make all public sidewalks accessible. As a result, cities must remove barriers that block disabled access along the length of the sidewalks. Here is the link to an ADA lawsuit filed against Los Angeles; on pages 10--11 it specifically mentions parking on the sidewalks in North Westwood Village as a barrier to travel by persons with disabilities:
http://www.its.ucla.edu/shoup/PinedaVsCityOfLosAngeles.pdf

In case this issue has escaped your notice, here is the link to copies of letters and e-mails sent to Jack Weiss, City Attorney Rocky Delgadillo, and Mayor Villaraigosa about illegal parking on Los Angeles sidewalks: http://www.its.ucla.edu/shoup/CorrespondenceAboutADA.pdf

If you or any of your staff are concerned about general issue of accessible sidewalks, here is the link to a recent article on repairing broken sidewalks in Los Angeles:
http://shoup.bol.ucla.edu/PuttingCitiesBackOnTheirFeet.pdf

Find one handicapped person that lives in Westwood Village that is reasonably upset about this practice. One. I know Shoup hasn't. Novel idea- tear down Shoup's house, build a parking garage for all the people who have to park on sidewalks. Better yet, remove the permit only street parking rules in the surrounding neighborhoods of mini-mansions with multi-car garages and driveways that can park stretch hummers and this problem is solved overnight.
I know the concept that their day laborers might have to actually park in the driveways of their masters is so extreme monacles might just pop out but it'd sure do a lot to solve Westwood's parking problems. Quite a bit more realistic than Shoup's fantasyland of high priced parking and people happily riding segways around L.A.

Anonymous, you crack me up. In fact, Prof. Shoup is working with a handicapped UCLA student who has to navigate his wheelchair in the street's travel lanes and compete with the cars, because the sidewalks are obstructed. He can't get to school, get groceries, or hang out with his fellow students without risking his life.

I challenge YOU to find a single handicapped person in Westwood Village who doesn't mind having to get in the street and try to keep up with speeding drivers. One. I know you haven't.

Westwood has one of the highest rates of walking, cycling, and transit riding of any neighborhood in Los Angeles. The Westwood community deserves clear sidewalks.

Oh, and if you want to see a Shoup "fantasyland" - you don't have to go to the future or a far-away country. You just have to go to Old-town Pasadena, which followed his advice, priced curb parking to ensure that there is always a space available, and returned the revenue to the neighborhood. Tell me how you like it.

Perhaps Shoup should start a campaign that Brings the parking enforcement local and allows Westwood to regulate itself, with the money going back into the neighborhood for improvement to sidewalks. Neighborhood parking is atrocious and I am now being ticketed for a car that is in a private driveway not blocking a sidewalk and they are claiming that it is. I have been parking there for 6 years, with less than ten inch overhang of a 5 ft wide sidewalk.

old town pasadena is a shopping district where people can choose to shop elsewhere if they want free parking. Westwood is a residential area, I can't choose to find a different place to park my car without also moving out of my house.

As of today, hundreds, if not thousands, of UCLA students living in Westwood village are having their parking spots displaced for albeit a pretty legitimate reason.