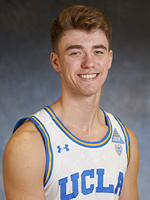 Meet UCLA’s most beloved player. He’s a walk-on who has made one basket in four years

The chant first appeared at Pauley Pavilion two weeks ago, in UCLA’s season opener against Cal State Bakersfield, sweeping down from the student section like a prayer. “We want Rus-sell! We want Rus-sell!”

The Bruin basketball team is filled with some of the sport’s most colorful players, prominent personalities who have captured the city with breathtaking shots. The chant is for a kid who has made one basket in four years. “We want Rus-sell! We want Rus-sell.”

The celebrated Bruins basketball team is led by celebrity athletes participating with full scholarships and marketing deals and a real chance at big NBA money. The chant is for the kid who is paying to play. “We want Rus-sell! We want Rus-sell.”

And thus, in this year’s Bruins basketball bible, the last shall be loudest. Arguably the most beloved player on one of America’s most popular teams sits at the end of the bench, plays only at the end of the games, and marvels that anybody even knows his name, much less chants it at the end of blowouts.

“I was like, ‘Are they really cheering for me?” recalled senior walk-on Russell Stong of the first time he heard the rallying cry. “I was in shock. Nobody warned me. I was taken aback. It’s the most amazing thing.”

In a world where big-time college athletics has sprinted beyond the reach of most regular college students, it’s the most perfect thing. Stong has a 3.86 GPA while studying mechanical engineering and business economics, his parents pay around $40,000 a year in tuition and he races around campus on a motorized scooter while constantly juggling classes and labs and tests. Yet for four years he’s also played on the basketball team, an everyman among superstars, a kid who brings schoolwork on road trips and takes tests in locker rooms and shoots by himself at 11 p.m. because that’s the only time he can breathe, his journey so difficult yet delightful that people are now publicly demanding he get into the games.

“I’m not going to lie and say I haven’t dreamed about being in crunch time and shooting buzzer beaters for the win. But my biggest dream is just to be a part of this team.”

Happy Thanksgiving from this most warm and wonderful of shadows.

”He’s ‘The Man,’” said coach Mick Cronin. On his wrist, Stong wears a silver bracelet engraved with his lifelong motto, “Dream. Believe. Achieve.” So far in his young 21 years, he’s checked every box. “He’s a hot commodity,” said teammate Jaime Jaquez Jr. “He’s loved throughout UCLA like no other.”

He is asked if he remembers it. Dumb question. “I caught the ball on the left wing, pump-faked the three, drove to my right, the defender reached, I spun back to my left hand and shot a left-handed layup,” he said. “That play is definitely ingrained in my mind.”

Not to mention, written on his shoes. He was so excited by his bucket that he immediately inscribed the event on the side of his sneakers and placed them on a makeshift trophy case in his Northridge home. There are several other pairs of UCLA-supplied shoes in the same case, the first shoes he was given, the first shoes that got into a game, a veritable rack of gratitude. Clearly, while nobody has played less than this guy, nobody is happier to be here.

“Sometimes I have a reality shock,” Stong said. “It’s like, ‘I’m really on [the] UCLA basketball team!’ When I have a second to breathe and think about what I’m doing and where I am, it’s amazing, I’m blessed, I’m the happiest person in the world.”

His happiness can be seen throughout the game, from his end of the bench, as he loudly celebrates his teammates’ every big play. His happiness can also be seen during his brief moments playing, as he refuses to immediately gun the ball like some opportunistic benchwarmer, instead playing as soundly as if the score were tied.

“He always does the right thing,” said Cronin. “There’s no better nonscholarship player you can have for your program, his teamwork, his academics, his character, he’s a great positive for us.” When Stong approached Cronin with the idea that he would take advantage of the NCAA’s COVID redshirt rules and stick around for a fifth season next year, the coaches answer was telling. “I’m like, ‘You can stay for 10 years,’” said Cronin.

Stong initially wasn’t even given 10 minutes. While he played for two state championship teams at Crespi, he wasn’t seriously recruited anywhere. He decided to attend UCLA for the academics while crazily dreaming he could just show up and join the basketball team. “He point-blank looked at me and said, ‘Don’t worry Mom, I will be playing basketball,’’’ said his mother, Candice. “What Russell brings is hope … don’t let anybody say you’re not good enough ... there’s always a place for you.”

He initially made a connection with Steve Alford’s staff through then-Crespi coach Russell White, but he couldn’t even wrangle a preferred walk-on spot. It took several months of constant e-mails and texts and visits for Alford’s folks to even recognize him. But injuries happened and a space opened and on a November day that Stong will never forget, his study session in Powell Library was interrupted with a phone call. “It was the basketball team,” he remembered. “They said they needed me. I said I’ll be there.”

He’s been there ever since, even as it has stretched and strained his academic pursuits, even though he received nothing monetary in return, working off his passion, living off the love. “He’s definitely reached cult hero status. I’m worried it’s going to get so bad, we’ll be up eight with 2:20 to play and I have to put him in.”

“It must be a hard thing to do, to work all those hours in the classroom, be constantly in the gym, working harder than anyone on the team and never getting any minutes,” said his childhood friend Brendon Harrington. “But the bottom line is, he really loves doing this. He knows how cool it is. He’s UCLA’s No. 1 fan.”

He’ll be late for practice because he can’t rearrange his difficult schedule like others and because he refuses to miss class. He once took one midterm test in a Stanford locker room before a walk-through, and another midterm test in the same locker room before a game. When the books finally go down, the basketball goes up in late night solo shooting sessions at the Mo Ostin practice court, where he is accompanied only by his smartphone blaring Lil Baby.

His current schedule during the most important UCLA basketball season in many years? He’s taking micro-economic theory, statistics for economists, a manufacturing processes lab and a bio mechanical research class. “I personally don’t know how he does it,” said his mother. “But he does it.”

Turns out, he does it so well, he was the only Bruin to record a victory in last year’s Final Four. He won the NCAA’s Elite 90 Award for having the highest GPA of any player among the four teams. “What Russ does is inspiring to all of us,” said Jaquez. “He makes us all want to be better.” Jaquez admitted that in recent games, he’s joined the crowd in chanting, “We Want Rus-sell.”

Cronin laughingly acknowledged that the more he hears the chant, the more he feels the pressure.

“He’s definitely reached cult-hero status,” Cronin said. “I’m worried it’s going to get so bad, we’ll be up eight with 2:20 to play and I have to put him in.”

Sure, Stong is human. Yes, he has dreams. Certainly, he wonders what would happen if, just once, Cronin would look down the bench at him before the final minutes of a rout and give him an earlier chance in a close game. “I’m not going to lie and say I haven’t dreamed about being in crunch time and shooting buzzer -beaters for the win,” Stong said, pausing, smiling. “But my biggest dream is just to be a part of this team.”

Ironically, the most compelling aspect of Russell Stong’s chanted name occurs when folks get it wrong. Before many games, Alex Timiraos, UCLA’s basketball communications director, will frequently have to correct opposing radio broadcasters and public address announcers. “They will have already stuck in the ‘r’ in his last name, thinking it’s ‘Strong,’” Timiraos said. “We’re always quick to remind people, it’s not ‘Strong,’ it’s ‘Stong.’”

Turns out, they’re both right.