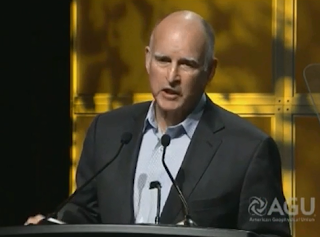 Governor Brown - specifically citing his membership on the UC Board of Regents - vows to protect DOE lab employees from political pressure on the climate change issue. His remarks come after a request from the Trump transition for a list of employees involved in climate change research. In previous postings on this blog, we have asked what the Regents plan to do about this matter.*


Gov. Jerry Brown, rallying a room of scientists Wednesday with his most heated rhetoric yet on the topic, suggested California would defy the federal government should President-elect Donald Trump impede the state’s efforts to thwart climate change.
“We’ve got the scientists, we’ve got the lawyers and we’re ready to fight. We’re ready to defend,” he said to boisterous applause at the American Geophysical Union conference in San Francisco...
He said if the federal government “starts messing with” the state’s renowned science facilities, such as Lawrence Livermore National Laboratory, “I am the president of the Board of Regents. I am going to say, ‘Keep your hands off. That laboratory is going to pursue good science.’”...
Full story at:
http://www.sacbee.com/news/politics-government/capitol-alert/article120928688.html
Video link below:
---
*http://uclafacultyassociation.blogspot.com/2016/12/trump-transition-probe-of-energy-dept_13.html and http://uclafacultyassociation.blogspot.com/2016/12/trump-transition-probe-of-energy-dept.html
Posted by California Policy Issues at 8:31 AM