The Buried Lede on UC IT Outsourcing 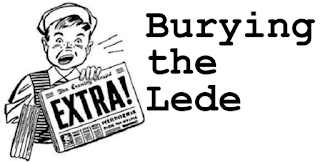 If you look up "bury the lede" on the web, you will find definitions such as:

Fail to emphasize the most important part of a story or account.*

NPR carried a story about the outsourcing of IT jobs at UC-San Francisco.** Blog readers will know that story is old news - although perhaps not for the IT workers whose jobs are being sent to India via an outsourcing company called HCL. The matter has come up at the public comments component of past Regents meetings and may well do so again in January. However, buried in the NPR story is this revelation:

The contract (with HCL) covers all 10 University of California schools and that means it could potentially endanger thousands of IT jobs.

Given UC's (and especially UC-SF's) dependence on federal funding, this affair could conceivably trigger an ad hoc intervention similar to what happened at Carrier air conditioning. Anyone at UCOP or the Regents thinking about that possibility?
----
*https://en.oxforddictionaries.com/definition/bury_the_lede
**http://www.npr.org/sections/alltechconsidered/2016/12/27/507098713/outsourced-in-a-twist-some-san-francisco-tech-jobs-are-moving-to-india
Posted by California Policy Issues at 7:05 AM